The name Honeymoon Bridge can be applied to any adaptation of Contract Bridge for two players. There are several versions. All of them use a 52-card pack, with suits and cards in each suit ranking as in Bridge. Scoring is the same as in Rubber Bridge.

Two players use a 52 card pack. Suits and cards in each suit rank as in Bridge.

The dealer shuffles and dealer's opponent cuts. The dealer deals 13 cards to each player, one at a time. The remaining 26 cards are placed face down to form a pile from which cards are drawn during play. This is known as the stock.

The first 13 tricks are played at no trump. Non dealer leads to the first trick, and it is not necessary to follow suit. These tricks do not count towards the score - they are simply discarded - but the winner of each trick draws the top card from the top of the stock and the loser takes the next card. When drawing a card you add it to your hand without showing it to your opponent.

After 13 tricks each player still has 13 cards, and if they have very good memories they will know each other's hands. The players now bid as in Contract Bridge (doubles and redoubles are allowed), until one player passes. The final contract is then played, the opponent of the bidder leading to the first trick. Suit must be followed, as in Bridge.

Some players turn the top card of the stock face up before the lead to each trick, so in the first 13 tricks you know what card you will pick up if you win the trick (but not if you lose).

Some play that you have to follow suit in the first 13 tricks. However, since following suit is not enforceable when players draw new cards after each trick, it is probably better to play that you don't have to. In the last 13 tricks suit must always be followed as in Bridge.

No cards are dealt, but after shuffling and cutting, the 52 cards are stacked face down. The players take turns to draw cards as follows: at your turn you look at the top card of the stock (without showing it to your opponent). You may either take this card and add it to your hand, or discard it to a face down discard pile. If you reject the first stock card you must take the next stock card and add it to the hand. If you take the first stock card you look at the next stock card and must discard it face down. Players take alternate turns until the stock is exhausted. At this time, each player has a hand of 13 cards, and has seen 13 of the 26 cards in the discard pile, but does not know which of the other 26 cards are in the opponent's hand.

The players now bid as in Contract Bridge (doubles and redoubles are allowed), until one player passes. The final contract is then played, the opponent of the bidder leading to the first trick. Suit must be followed, as in Bridge.

Some play that in the drawing, a player who accepts the top card of the stock does not look at and discard the next card. In this version, there will generally be some stock cards left over when each player has collected their 13 cards. Neither player knows what these remaining stock cards are.

The two active players sit next to each other. Four 13-card hands are dealt as in Bridge - a hand for each player and two dummy hands. The hand opposite each player is their dummy, but they cannot look at it until after the bidding.

The two players bid as in Contract Bridge (doubles and redoubles allowed) until one player passes. The players then look at their own dummies, but do not show them to each other until after the opening lead.

The declarer's opponent leads a card to the first trick from the hand that will be to declarer's left: this will be the opponent's own hand if the declarer is the right-hand player, but the opponent's dummy if the declarer is the left-hand player. Both dummies are then exposed on the table, opposite their owners, and play continues as in Bridge, each of the players playing cards from their own dummy at its turn.

Some play that neither dummy is exposed to the opponent. After the end of the bidding, the dummy cards are placed in racks so that they are visible to the owner throughout the play, but not to the other player. Hans Peter Albach suggests that when playing this way, the two players should sit facing each other across the table, each having their opponent's rack in front of them to their left. So if South and East are the real players, with North and West as their dummy partners, the arrangement and sequence of play looks like this: 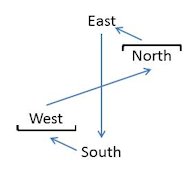 To eliminate any positional advantage in sitting to the left or right, some play that the hands are always arranged, after the bidding, in the clockwise order: opponent's dummy, declarer's dummy, opponent, declarer. In this case the opponent's dummy leads to the first trick.

The players sit next to each other. Four 13-card hands are dealt. The hands belonging to the players are dealt normally, but each of the dummies are arranged with six cards face down in a row, one face up card on top of each face down card, and a seventh face up card at the end of the row with no card under it. Each active player owns and plays the dummy opposite them.

The two players bid as at Contract Bridge (doubles and redoubles allowed) until one player passes. In this version each player can of course see seven cards of each dummy as well as their own cards during the bidding. The hand to the declarer's left leads to the first trick.

When it is the turn of a dummy hand to play, its owner plays a face up card from it, obeying the usual rules of following suit. If this exposes a face down card, that card is turned face up at the end of the trick.

13 cards are dealt to each player and played at no trump. Suit must be followed, and there is no drawing of replacement cards as in Draw Bridge. The player who makes seven or more tricks scores as though they had played a contract of 1NT, and gets an additional premium of 100 above the line.

The remaining cards are then dealt, 13 to each player, and bid, played and scored as in Bridge.

This game, first published by J.Q.Kansil in 1970, uses a special 55-card pack consistaining three extra cards known as Colons: the Grand Colon matches aces; the Royal Colon matches Face cards (K,Q,J) and the Little Colon matches the numeral cards 2-10. A Colon can be discarded on a matching lead: it loses the trick but stops the opponent from leading a card of the same suit to the next trick.