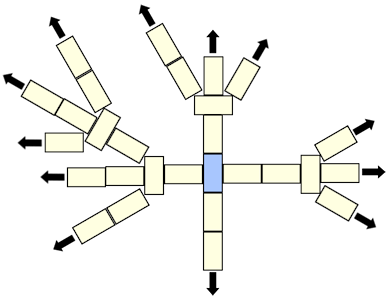 In some domino connecting games not only the first double played but all doubles are 'spinners' from which the layout can be extended from the sides and the ends. In these games, each time a double is played on an arm it can potentially branch into three arms, producing a highly branched layout with many open ends, which can be described as a 'tree'.

For practical reasons, the new arms may be angled away from the centre of the layout rather than built at right angles, to keep the various arms separate from each other without danger of collisions.

Here is a list of traditional and invented domino tree games on pagat.com.

Notes on the index

Invented games, mostly submitted by readers of pagat.com, are listed in italics.

Players
The preferred number of players is shown in bold. Other numbers with which it is possible to play are shown in grey.
Equipment
Western domino sets are indicated by the highest number of pips on a tile end - for example [6:6] is a standard double 6 set of 28 tiles, [12:12] is a set of 91 tiles with up to 12 pips on each end.
Game Type
Indicates the game's matching rule (for example 'equal ends) and objective (for example 'shedding' if the aim is to be the first to get rid of all one's tiles) and other families to which the game belongs.