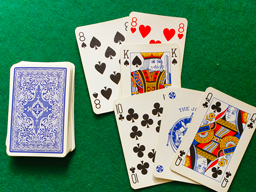 An unusual draw and discard game from Nepal, which has also become popular in Israel. Players get rid of their cards by discarding rummy-like combinations which they have collected.

This unusual draw and discard game is played in Nepal, where it is known as Dhumbal or Jhyap. Around the beginning of the 21st century it became popular under the name Yaniv with young players in Israel, both at home and when travelling abroad. It has since spread to other countries, for example a version in played in the Netherlands where it is known as Kluft. It is somewhat akin to Rummy, in that players can get rid of cards by forming them into sets and sequences, but the mechanism of play is different. Sets and runs are not melded but discarded, so that one of the cards used can be picked up by the next player.

The objective of the game is to have a lower total value of cards in your hand than the other players. When you think you have achieved this, you call "Jhyap" in Nepal or "Yaniv" in Israel to stop the play and compare hands. "Jhyap" is a slang word meaning intoxicated or "high", and "Yaniv" is a Hebrew personal name. If someone else has an equal or lower total, the caller gets a penalty. In Israel, this situation is known by some players as "Asaf", which is another Hebrew name.

Each game is composed of rounds, and each player's total score is updated after each round. The goal of the game is to keep your score to a minimum. Players with more than an agreed maximum, for example 200 points, drop out of the game, which is then continued until there is only one player left.

The following description is mainly based on the Israeli version of the game. Some different rules found in Nepal and in the Dutch game Kluft are listed in the Variations section.

This page is based on information from Sagi Goldman, Noam Nelke, Itay Adler, 'Wdeupree' and László Kiss.

This game can be played by 2 or more players. It is said to be best for 2-5 but in theory up to 8 or more people could play, though with a large number of players the game would be very slow.

A 54 card deck is used - the standard international deck with two jokers. When there are four or more players, some people prefer to use two such decks shuffled together, to avoid running out of cards. In that case you continue to use the double deck even after the number of players is reduced below 4.

Deal and play are clockwise.

Any player may shuffle deal the cards. Five cards are dealt to each player, one at a time, face down. The remaining cards are placed face down in the middle to form a drawing stock. The top card of the stock is turned face up and placed alongside it to start the "Dump Pile".

The players look at their cards.

The starting player for the first round should be chosen in advance by some random method, since the starting player has an advantage. In subsequent rounds the winner of the previous round starts. The turn to play passes clockwise around the table.

In your turn you are allowed to do one of two things:

Throwing and picking up

A player can throw either:

No matter how many cards you throw, you pick up just one card. The cards that can be picked up are:

For example if the previous player threw the sequence

7, you could pick up the

When throwing a run, the cards must be thrown in sequential order - for example 2-3-4-5, not 3-5-4-2 - so that the card that can be taken by the next player is the lowest or highest of a sequence. You could throw 8-9-Joker either in that order or as Joker-8-9, but players try if possible to avoid throwing a sequence ending in a Joker, since the Joker is too valuable to the next player.

Sets of equal ranked cards can be thrown in any order, protecting the middle card(s) from being picked up by the next player. For example if

8 is thrown, the next player can pick up either black 8 but not the heart 8.

Only one card or one combination (set or sequence) may be thrown in a turn. For example if at the start of your turn you hold 5-5-5-9-9 you can throw either the fives or the nines but not both.

Note that (unlike Rummy) you always discard before you pick up.

If at the start of your turn you have 5 points or fewer in your hand, and you think you have the lowest total, you may call "Yaniv" (in Israel) or "Jhyap" (in Nepal). This ends the play and everyone exposes their cards. (In Israel the usual expression is in fact "go down on Yaniv", which I am told is as suggestive in Hebrew as in English.)

Note that you are not obliged to call when your total is 5 or less. You can throw and pick up if you wish, and play continues. Also, you cannot call other than at the beginning of your own turn. If after throwing and picking up you think you have the lowest total, you must wait for your next turn in order to end the play.

If the drawing deck is empty and no one has yet ended the play, all the cards of the dump pile except for the last player's discard are shuffled and stacked face down to make a new drawing deck.

The object is to score as few points as possible, and in particular to keep your cumulative total below 200.

When someone uses their turn to call for end the play, all players immediately reveal their cards.

The player with the lowest card point total for that round starts the next round. If two or more players had the equally low totals, the starter of the next round will be the first of them, counting clockwise starting to the left of the caller.

The player's total scores are kept from round to round. Any player who has more than 200 points is eliminated from the game, which then continues with the remaining players, until only one survives.

It theoretically can happen that the last two (or more) players in the game are eliminated at the same time, as a result of a wrong call. For example the scores are 198-168, the player with 168 points calls with 3 points, but the opponent also has 3, so now both are on 201. It is not clear what should happen in this situation. The only solution seems to be to play another round. If the final scores were different, say 201-202, one could say that the player with the lower score (201) was the winner.

In Nepal, the game is usually played counter-clockwise.

In Nepal, the game is often played with a 52-card pack without Jokers. In this case the Jacks score 0 points while the Queens and Kings score 10 each. When playing with Jokers some score the Jacks, Queens and Kings as 11, 12 and 13.

In the Nepali game, a player may pick up any one of the cards discarded by the previous player, not only the first or last card. In Israel, some play that when a set of equal ranked cards is thrown, the next player may pick up any of those cards, irrespective of the order in which they are thrown, but if a sequence is thrown only its end cards can be taken.

Many play with different point limits for calling "Jhyap" or "Yaniv". Some play that you can end the play with 6 or fewer points, others set the limit higher, at 7, 10, 11 or 13. The higher the limit the faster the game, so higher limits may be better for larger groups of players. Some play with no limit at all, but when there is no limit, there is often a rule that the play cannot be ended before everyone has had one turn to play.

In Nepal, if a player calls "Jhyap" and another player has an equal or lower number of points, the usual penalty for the wrong call is 25 rather than 30, and the other players do not score the points in their hands. In another variant, only the caller and any players with more points in their hands than the caller score these points, while those who are equal to or lower than the caller score zero.

In Nepal, it is usual to eliminate players when their score reaches more than 100 points (with exactly 100 you are still in the game) and there are no score reductions when particular numbers are reached.

In Israel, there are several different versions of the scoring rule about reducing your score when it exactly hits a certain number:

Some play that if you manage to "Go down" successfully (i.e. scoring 0 points) three times during a game (not necessarily in a row), 20 points are deducted from your total score. This rule is suspended when only two players remain, otherwise the game may well never end!

This Dutch variant was described to me by László Kiss. The word 'kluft' has no other meaning in Dutch so far as we know. Kluft differs from the main game described above as follows:

Only the top card can be drawn from the discard pile. A player discarding a sequence can do so either in ascending or in descending order, thus leaving either the lowest or the highest card in the sequence on top (most often the highest card is left on top unless the discarder knows that matches a card held by the next player), and a player discarding a set of equal ranked cards can decide which suit to place on top.

Jokers cannot be used as a substitute card in a sequence, they are just a card with a value of zero.

To stop the game a player who has 5 points or fewer in hand at the start of their turn may call 'Kluft', claiming to have the lowest or equal lowest scoring hand. The player who calls Kluft does not immediately show their cards. Before that, each of the other players (in no particular order) must decide whether to expose their cards or challenge the call by saying 'Onderkluft'. 'Onderkluft' is a claim to have point total that is lower than (not equal to) the player who called Kluft and also lower than any other players who have already called Onderkluft. Therefore no one will call Onderkluft unless their hand is worth 4 or less: with 5 or more they simply expose their cards. When everyone has either exposed their cards or called, the callers also show their cards.

Players whose cumulative score is over 100 are eliminated. A score of exactly 100 is reduced to 50.

Other Web Pages and Software

Here is a description of Nepalese Dumbal by David Bosschaert.

You can play Yaniv (also known as Yusef) online at pickup.cards.