You arrive at the club, and to fit in, you decide to play a game of whist. However, during the game you find out that two of the players are androids, but you must finish the game so that the members of the club do not get suspicious. Fortunately, you can use your brain link and see the cards of the opponent android and control your partner android to some extent...

The game is for two players, and it utilizes one deck of 52 cards and two card holders capable of holding 13 cards each. Quick and dirty card holders are extremely easy to make out of pizza boxes and duct tape - see illustration. 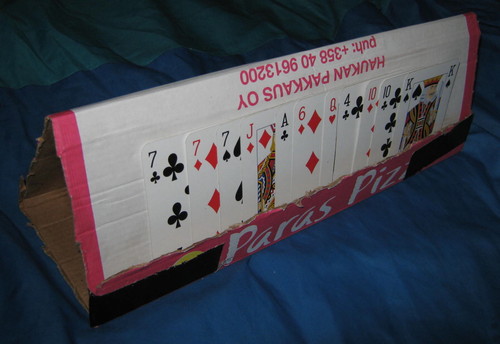 The game is played and scored according to the basic rules of Whist except that both partnerships have a human player and an android player. Also, no points are awarded for honours.

4.1. When playing a card to a trick other than leading:

For the 'Beat' and 'High' commands, trumps are considered higher than non-trump cards.

4.2. When leading to a trick or immediately after an error message:

Any of the three previous commands can be prefixed with the word "high", which causes the android play the highest card instead of the lowest.