The game requires both luck and thinking - and it is mostly for fun.

The game is best for 2-6 players (never tested with more). The game requires a minimum of 110 card deck (two standard 52-card decks with a total of 6 jokers), but more cards can be added with more players.

The winner of the game is the player who collects the most cards.

Each player is dealt 10 cards. The remaining cards are stacked on the table face down - this is called the deck.

The player to dealer's left plays first, and the play continues clockwise around the table.

At the start of the game, and when there is no avalanche in progress, each player in turn has two options:

Note - it is not possible to do both. If you draw a card (snowfall) you cannot also start an avalanche - it is now the next player's turn.

When an avalanche is in progress (there are cards face up on the table), each player in turn must add a card or a set of equal cards to the avalanche, playing them face up. There are three possibilities:

If the avalanche grows, the avalanche cards stay face up on the table and the next player must play a card or cards to grow it, stop it or let it fall.

If the avalanche falls, the face up cards in the avalanche are given to the previous player - the player to the right of the one who let it fall, who stores tham face down. They are not used again, but the player who has most stored cards at the end will win the game.

After an avalanche is stopped or allowed to fall, the next player has the choice of snowfall or starting a new avalanche.

When the deck is empty, snowfall is no longer possible. If there is not already an avalanche, the player must start one. As players run out of cards in hand, they drop out of the play - their turns are skipped. This continues until only one player has cards. This last player adds all cards remaining in hand to their pile of stored cards.

The winner is the player with most stored cards.

The players are Foo and Bar. Here are their initial hands:

Or displayed in sets:

Both draws are extremely lucky, and the new hands are as follows:

Foo feels that he has a really good chance to win a short avalanche because it is the beginning of the game. Bar also feels optimistic for the same reason, but she has no set of two cards, which means when a single card is not enough, she will have to put in the three 5's to keep up. It's Foo's turn, and he starts an avalanche:

Now the hands are as follows:

It's Bar's turn, and she has very few cards in hand, so she decides to get 10 fresh cards. For that her hand must be empty. To reach this goal, she starts an avalanche - which she will lose for sure.

Foo takes the cards from the table as score.

Now the hands are as follows:

Because Foo also needs ten new cards he starts another avalanche with little hope of winning it:

Now it's Foo's turn and the game continues

The flow chart below shows the options at each stage of the game. 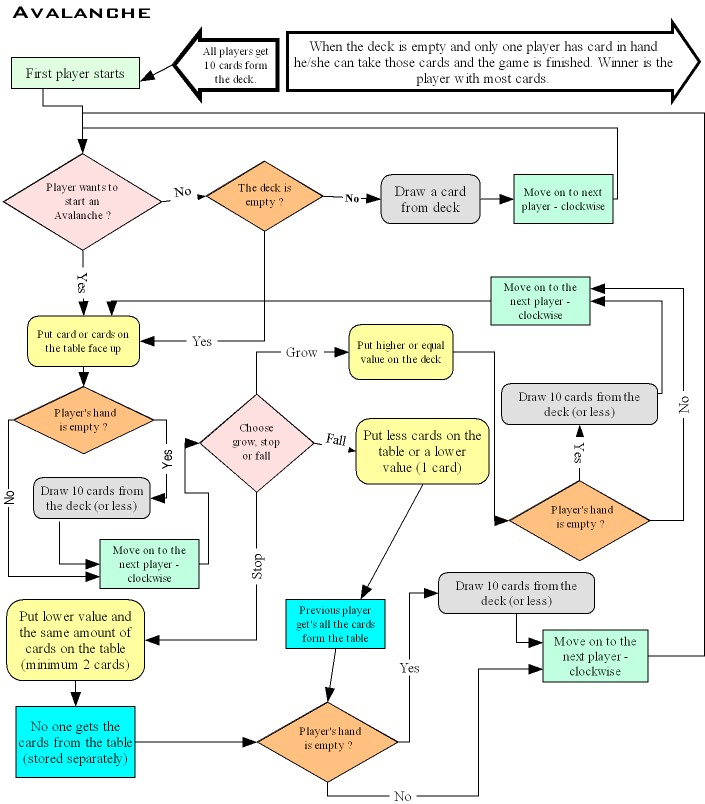