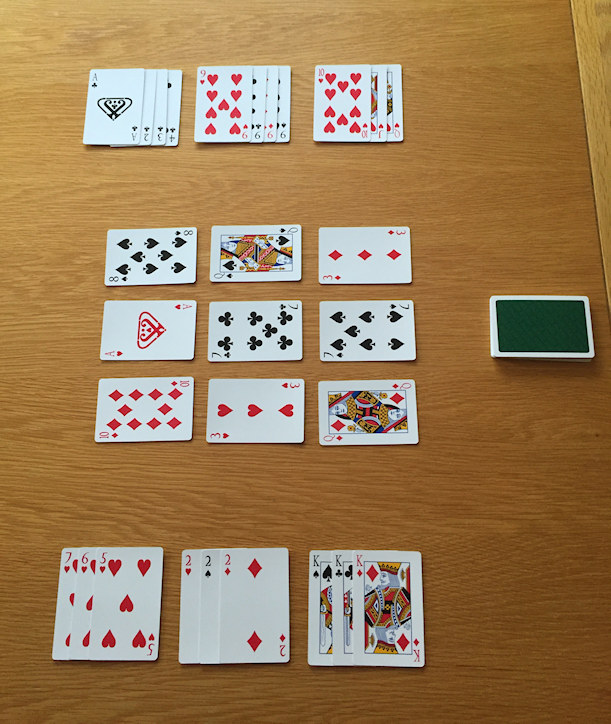 Named after the eponymous village in Dorset, England, Cranborne is a skilful two-player Rummy game by Richard Norris, in which all the discards are available at all times and each player has two hands, the second of which is picked up when the first is exhausted. On average the playing time for a game is 15-20 minutes.

It may be helpful to point out the relationships between the novel terminology used for this game and the equivalent concepts in traditional Rummy games.

The area in which each player's melds are laid out is known as their 'display'. The discard pile, which in this game is not a pile but a collection of separate cards laid out in an array, is known as the 'window'. A turn is begun by drawing the top card from the stock if available. Cards from the window can be taken whenever needed to help form melds - the way in which cards are arranged in the window has no significance for the play.

The 'major' is a player's initial 10-card hand. When this is emptied, the player picks up a second 5-card hand called the 'minor', which is analagous to the pozzetto in Burraco or the foot in Hand and Foot Canasta. However, unlike in those games, the second hand (minor) cannot be picked up in the middle of a turn after melding all cards from the first hand (major). The 'transfer' can only be effected by melding all but one card of the major, discarding the last card to the window to end that turn, and beginning the next turn by picking up the minor and then drawing a card in the usual way.

Display - a player’s Runs and Sets laid out face up on the playing surface in front of the player.

Go Out - a player Goes Out when there are no cards left in their Hand.

Major - the first 10 cards of the Hand, dealt face down to each player and with which play begins.

Minor - the remaining 5 cards of the Hand, separately dealt face down to each player at the same time as the Major but which are not used or viewed until the player Transfers.

Pack - the standard 52 cards used in the game.

Run - 3 or more sequential cards within the same suit.

Stock - the 22 cards remaining after the Hands are dealt, placed face down in a single pile centrally at the head of the Window.

Transfer - a player Transfers automatically when the only cards left in their Hand at the start of their turn and before drawing from the Stock (subject to Rule 9) are the 5 cards of their Minor.

Window - the central playing surface where discarded cards are placed face up and individually separate. The Window is empty at the start of play but during play it contains a varying number of cards. The cards in the Window are laid in uniform rows, with a maximum of 3 cards per row, to enable the players to readily scan them. The cards in the rows are manually moved together, when gaps arise during play.

1.  Cranborne is played by two players. The players play in turn, and the object of the game is to be the first player who Goes Out by clearing all the cards from their Hand through the forming of Sets and Runs. Aces are low.

2.  The players initially cut the Pack for dealer, and thereafter the loser of the previous game is the dealer. With the aim of breaking up the Displays from the previous game in a simple but effective way, the dealer shuffles the Pack by dealing the cards into at least 7 piles and by picking up the piles at random. Each player is then dealt a Hand in the usual, alternate, card-playing fashion. Play commences with the non-dealer.

4.  Discarding a card to the Window is mandatory at the end of every turn, including the turn before a player Transfers or when a player Goes Out, even if the card could otherwise be used in the player’s Display.

8. There is no limit to the number of Sets and Runs a player may move to their Display on any one turn. A card or cards in a Set or Run in a Display may not subsequently be moved from that Set or Run.

9.  If there are no cards left in the Stock, play continues without first drawing a card until a player Goes Out.