"Pentyrch" is a strategy game for up to four players; it is actually a recreational board game that uses playing cards. The object of the game is to get the "court cards" (Jack, Queen, and King) to safety across the playing surface to the other side (and has some similarities to games like Alquque, Halma and variants including modern versions such as Chinese checkers).

Creating the playing surface: Starting from the furthest most "Home Card" at the top the dealer should create the playing surface as shown in diagram 1 (three columns by fours cards long and three rows with four cards wide, and with single cards at the ends of the cross sections).

Rules of the game: The aim of the game is to get the court cards to safety across to the other side of the playing surface.

Each player takes a turn clockwise from the dealer’s left. A player’s first court card on to the home card position will need to be placed as a result of exchanging cards. The two remaining court cards may enter the game by using the Trapping and Protecting Rule should this be of a tactical advantage (see diagram 3)

Play continues by players advancing their original court card or entering the remaining court cards on to the playing surface.

2) Movement of Court Cards: Cards are moved directly along the columns across the rows and / or diagonally to the next adjacent card forwards or to the side in any direction except backwards.

A player must move if legally possible, even if it is not to their advantage. Where a player is not able to exchange cards in hand to enable a move the other players are entitled to ask to see the cards in hand so as to avoid any suspicion of cheating.

Where a player is not able to exchange cards in order to move but can use the Trapping/Protection rule, this must be done.

Moving from one space to the next: A player takes a turn of play by exchanging a card (or card pile) at the table (starting at their "Home" card) and removing the existing card. A card or cards from the hand are used as replacements.

3) The Exchange of Cards: Any card (or cards) removed from the table replaces the card in the player’s hand.

A card placed at the table must have either an equal or greater numerical value than the card that it is replacing. Once this is done a court card can be placed on top. The court card on the playing surface can be moved further across the surface during a later turn of play.

More than one card from a hand can be used to replace a card at the table. If a player does not have a single card that matches or exceeds the value of the card on show they may replace the card with two or more cards combined. However it is the top card of a new pile that determines the value of the pile for any further use.

A Card Pile: Where there is more than one card occupying a space, the card that is visible determines the value of the card to be exchanged but all the cards in the pile must be removed from the table during an exchange.

When using more than one card to create an exchange, the player needs to decide which of the replacement cards is to be the upper most on the table (e.g. the lower or higher value).

Alternative procedures of exchange: If a player wishes to exchange a single card at the table for a card of the same value in their hand rather than disturb the playing surface they may show the card from their hand to be exchanged to the other players. The court card being moved can then be placed on the required space, e.g. a six is at the table and a six is to be its replacement. This rule does not apply where multiple cards on the table are being exchanged.

4) Trapping and Protecting. Court cards in a space adjacent to another court card i.e. column, row or diagonal, can be placed on top of another (trapping or protecting) the court card or cards underneath.

The trapped or protected cards may not be used until the top card moves away and releases the next visible court card. Up to two cards can be trapped / protected, e.g. Queen on a Jack and a King on the Queen. Therefore a King may trap and / or protect and thereby conceal both a Queen and a Jack.

Court cards can be trapped / protected on all spaces including the central free space.

Central Free Space Rule: in the middle free space (no exchange of cards is needed for entry) the hierarchy of court cards is reversed; Jacks can trap Queens and Kings; Queens can trap Kings; but Kings cannot trap any cards.

The most economic way of entering court cards to the table is by use of the Trapping and Protecting Rule; the Jack is placed on to the "home card" for the first turn, followed by Queen then King. Court cards do not have to use this rule in order to enter the game.

Court cards that reach the "Home Card" space on the opposite side of the playing surface can be removed to safety on the players next turn; this removal of a court card constitutes a complete turn of play, no other cards may be moved.

The home card space may only be occupied by the original owner and the player who is trying to reach it.

The first player (or players) to get all three court cards safely home (off the playing surface) is/are the winner/s. The round of play should continue until the dealer has completed their turn in order to establish the individual placing.

6) Where No Legal Moves Are Available: If no player is able move, the person with the most cards in safety (off the playing surface) wins the game. If more than one player has the same number of cards in safety the winner can be decided by the following scoring system. Kings count as one, Queens as two and Jacks as three. If no cards are safely home or where players share the same points the game is drawn.

7) A Two Player Game: Two sets of court cards e.g. all red or all black may be used when there are only two playing.

8) Game Endings and Points: At least four games should constitute a match. The value of the court cards brought home is as follows: Jacks = 3 points, Queens = 2, Kings = 1. Therefore the strongest tactical card during a game becomes the weakest value at the end.

Partnership Games: Players sitting opposite should partner each other.

Top Tip: Using a smaller scale pack of cards like the novelty gift packs found in good quality Christmas crackers saves table space and neatly fits into almost any pocket. So Pentyrch can be played anywhere.

Below is a table layout of Pentyrch at the start of a game. 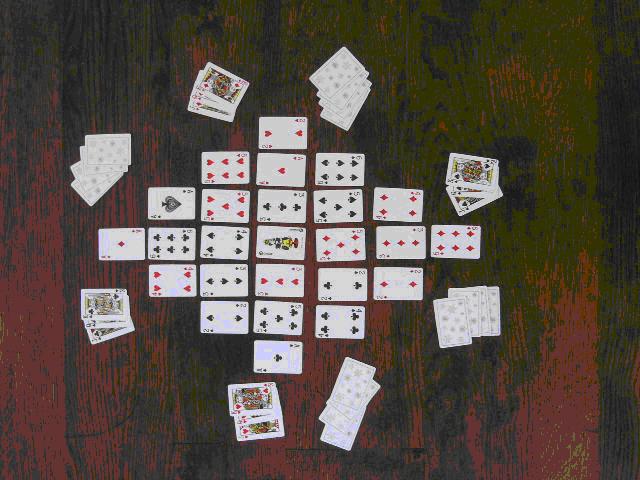 Pronunciation of the name Pentyrch:

Pentyrch is a Welsh word and is derived to the best of my knowledge from the words for "head or top" and "hog". "Pen" means head and "tyrch" means hog. The word "tyrch" is an old term that dates back many centuries and is no longer in general usage. Therefore Pentyrch is the hog’s head or top of the hog. Pentyrch is a village nestled below the "hog" which has now become the Garth hill; The Garth hill has several ancient burial mounds on its top and it and its nearby inhabitants is the subject of the film "The man who went up a hill and came down a mountain".

The anglicized pronunciation of Pentyrch is "Pen" as in the pen in pencil and "tyrch" as in Turk or Turkish. The "ch" is as a hard "k" sound.

The Welsh pronunciation is the same for Pen but the "tyrch" is pronounced like the "i" in itch. The "r" is rolled, the "ch" as "k" and therefore more like "Pen- tirrk".