Contributed by Greta Figel (dfigel@msn.com) [with a few notes by John McLeod]

Three decks of cards --- Use all the jokers. [Probably two jokers per deck, since this is an American game - 162 cards in all].

Play with only nickels, dimes, or quarters, no pennies.

Using the score sheet is very important because it is designed for this game. First hand is dealt 3 cards to each player. Turns consists of one card drawn either from the stock pile or the discard pile and then the player must discard one card. Each player takes a turn until someone can discard and "RAP". They must have 3 of a kind or a run of the same suit in their hand to rap.

The cards available to be drawn depend on the number of players:

The object of the game is to get the lowest score and Rap as often as you can, catching the other players with a lot of points in their hand. The Rapper then gets a star in the upper half of the score column under his name. The star counts as zero and is added to the previous score in that column. He holds onto his cards and does not show them yet. Then each player gets one more turn to try to get a rummy or to rid his hand of a high card. Rapper lays down his cards after everyone has had a turn. The other players then lay their hand down and play off of only the Rapper’s hand. (Example: if Rapper lays down 3 (or more) card run of the same suit, such as

7, the other players can play

8 and up consecutively on the

J, they can lay down any Jack in their hand.) By doing this you are eliminating points.

Aces count as high only.

Jokers and deuces are wild. [There is apparently no restriction on the number of wild cards that can be used in a combination when rapping.]

[No value is given for Twos and Jokers. Since they are wild cards, any player holding one will be able to lay it off on the rapper's combinations.]

[In each successive hand, the number of cards dealt increases by one. When more than six cards are dealt, it is probably permissible as in most rummy games, to rap with two or more separate combinations, provided that each has at least three cards.] 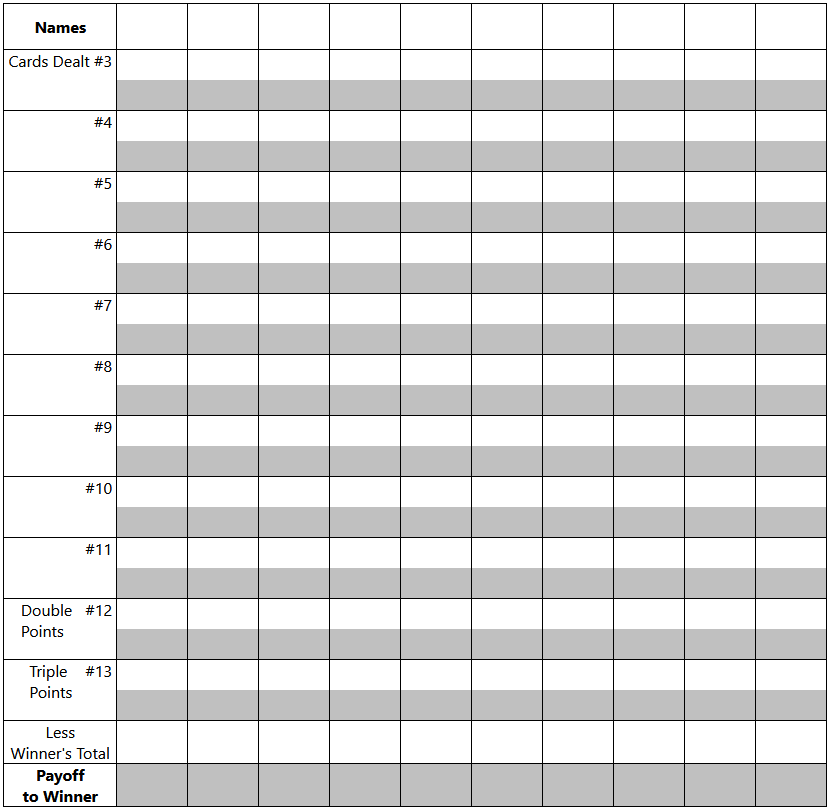