Rush is a positional game for two players, in which cards from two standard 52-card decks are moved around on a grid or 6 rows and 5 columns.

Separate the two decks and make sure each is well shuffled. One player takes each deck, draws 10 cards from the top and looks at them, and arranges them face down in a 5 × 2 rectangle in the two rows nearest to the player. When both players are ready, each player's 10 cards are flipped face up, and each player draws another five cards, which are held as a hand, with the faces visible to the owner but not to the opponent. The remaining 37 cards of each deck are stacked face down to the player's right, so that the layout is as in the diagram below. Note that there are two empty rows - i.e. two card lengths of space - between the opposing players' cards. 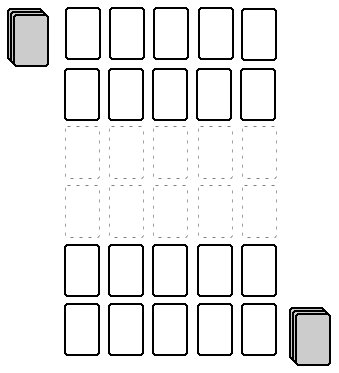 The players take alternate turns. During the game is is possible to have one or two of your cards on a space of the grid. Two of your cards on the same space are called a fusion pair and remain together until one or both are attacked by the opponent and defeated, or you choose to remove them from the grid. Fusion pairs can only be created in your fusion chamber (see below): it is not possible to create a pair on the board by moving one card onto another.

At each turn, you must take exactly one of the following actions:

2. Attacking. If one of your cards or pairs is adjacent to an opposing card or pair - i.e. the opponent's card(s) occupy a space you could move to if it were empty, you may attack. When a single card attacks a single card, the values are compared (ace = 14, king = 13, queen = 12, jack = 11, 10-2 = face value) and the lower valued card is defeated: its owner removes it from the board and places it on a discard pile from which it cannot be retrieved. If the values are equal both cards are discarded. When a fusion pair attacks, it attacks like a single card whose value is the sum of the values of its two cards - for example a pair of 6 and 7 has value 13, equal to a king. When a fusion pair is attacked, the attacker can choose whether to attack the whole pair or just the top card of the pair. If a pair is defeated, both cards are discarded. If only the top card is attacked and defeated, just this card is discarded leaving a single card in the space.

3. Fusion. Take two cards from your hand and stack them face up next to your face-down deck, in your "fusion chamber". Kings, queens and jacks cannot be fused: only number cards 2-10 and aces can take part in a fusion. You can only have one pair of cards in your fusion chamber at a time. If your fusion chamber is occupied you must move the fused cards to the board as a pair (see placing) before creating another. When creating a fusion pair you decide which of the two cards will be on top: this order cannot be changed or the cards separated until they are either defeated or withdrawn.

4. Placing. You may place one card from your hand or the pair of cards from your fusion chamber to any unoccupied space on the two rows of the grid nearest to you (i.e. the 5 × 2 grid where your cards started).