Contributed by Geoff Klassen (geoffk1@shaw.ca), who writes: "A few years back, my older brother taught me a card game called Snitch. At least that's what he was told its name was. I'm not sure where he got it from, but I was wondering if you knew of any other names for the game or any similar games."

Editor's Note. This game is reminiscent of the Iranian game known as Gharat (Loot). It's not quite the same though - in Gharat you are dealt four cards and do not draw any more until they are all played. There are no wild cards, and the scores are slightly different. If anyone can shed more light on the origin of Snitch and its relationship to Gharat, please let me know - John McLeod.

*2s and Jokers are wild

Object: To gain points by creating sets and stealing other players' sets.

Play: Each player is dealt 3 cards. The remaining stock pile is placed in the middle, from which a card is drawn to begin the discard pile. The player left of the dealer begins play, after which play moves clockwise. On a turn, a player may do one of the following:

Upon being challenged, a player may do one of the following:

A challenge need not end after a single phase of challenge-defend. If he so wishes, the challenger may continue the challenge by placing another similar card or wild down and restating the challenge, after which the defendant may defend in a likewise manner. Obviously, this process can only occur up to three times, since the players begin the turn with only three cards each. Whoever wins the challenge adds the played cards to the challenged set and, if necessary, makes the set his by placing it on the top of his 'stack'.

After a player has made his turn, if he holds fewer than three cards, he draws until he has three, after which the defendant (if there is one) replenishes his hand the same way. 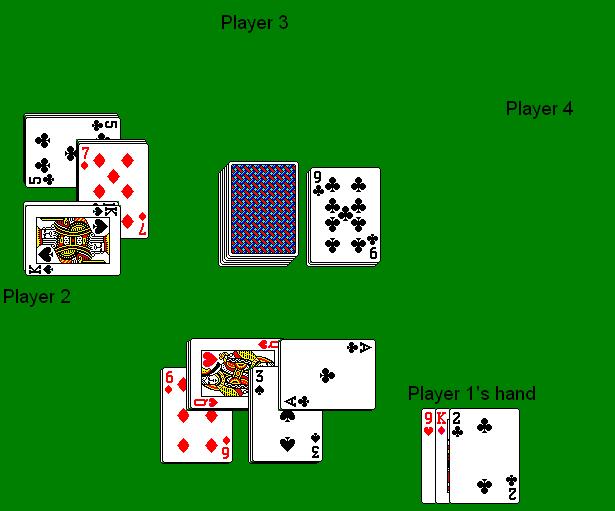 Once all players have no cards remaining in their hands, play is over, and counting can begin.

Each player gathers the cards in his sets and counts his points.

The deal now shifts to the left; extensive shuffling is encouraged.

A winner is determined by either: