Begin with all dominoes shuffled, face down on the table.  Players each take five dominoes, leaving them face down, which they line up to the left to form the “dance card”.  The top domino in the line is turned face-up.  Three dominoes are taken to form the hand, which you keep from your opponent’s view. To the right of the hand will be a discard stack. 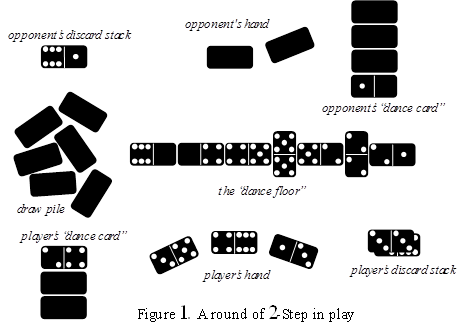 The player with the highest double in their 3-tile hand plays first onto the “dance floor”.  If no double is in either player’s hand, then the highest double at the top of a “dance card” is played first. If no player has a double showing, a re-shuffle is called and the round begins again.

The player that led with the highest double continues his turn by playing dominoes that will match either end of the dominoes on the “dance floor”.  You may play from your hand, your “dance card”, or the top domino of your discard pile. There are no spinners - the played dominoes form a single line with just two open ends.  If a domino is played from the “dance card”, then the next in line is turned face-up.  When a player uses all three dominoes from their hand before discarding, they may draw three more to re-fill their hand and continue play.  When no more plays can be made, a domino must be placed face-up on top of the player's discard pile to end the turn.

Then it is the opponent's turn to play. The opponent first refills their hand to three dominoes, and then begins their plays to the “dance floor”.

The round ends when a player plays their last domino from the “dance card” to the “dance floor”.

If the draw pile is empty and neither player can make a play to the “dance floor”, then the round “has two left feet”.  No points are scored and the round is replayed.

If a player wins with 11 points, then the opponent owes them a glass of lemonade.