Shichi Narabe is a Japanese card game closely related to the game known as Fan Tan, Sevens, Parliament or Domino in the West. 'Shichi' means '7' and 'Narabe' means 'lined up' so the name might be translated as '7 in a row'. As in Fan Tan, the players' objective is to empty their hands by playing their cards to a layout in the form of 13x4 grid beginning with the Sevens and building each suit outwards towards the King (high) and the Ace (low). There are two basic differences between the Japanese version and the Western game.

Players often take advantage of the passing rule to block the layout and prevent their opponents from disposing of cards. There are several variants, most of which are designed to make blocking more risky, leading to a more interesting game.

This page is based on information from YOSHIMURA Mayumi, KUROMIYA Kimihiko, Alexey LOBASHEV and TERANISHI Isamu.

This is a game for 3 or more players: it is probably best for around 3-5 people. The direction of play is clockwise.

A standard international pack of 52 cards is used for the basic game.

The dealer, selected by any convenient random method, shuffles the pack and deals out all the cards one at a time. If there are 3 or 5 players, some of them - those to the dealer's left - will have one more card than others. All players who hold Sevens place them on the table in a column to begin the grid.

The player who placed the Seven of diamonds plays first, and the turn to play passes clockwise. At each turn, a player must either play one card to the layout or pass.

A card can be played if it is the next in sequence extending one of the suit rows to the right or left - that is, the next missing card above or below the 7 of that suit. For example in the diagram at the top of the page the only playable cards are the

A player who has no playable card or does not wish to play a card passes. Each player is allowed to pass at most three times during the game. Traditionally players mark this by saying 'pass 1', pass 2' or pass 3' ('pasu ichi', 'pasu ni', or 'pasu san'). Some groups may find it more convenient to keep track by giving each player three tokens when the cards are dealt, one of these tokens to be surrendered for each pass.

A player who has already passed three times, is still holding one or more cards and has no playable card at their turn says 'hasan' ('bankrupt') and loses the game. They must immediately place all their remaining cards in the places where they fit in the grid. The other players continue to play, skipping the turn of the player who was bankrupt. instead of 'hasan' some say 'pasu yon' ('pass 4') or 'nagedashi' ('throw in').

After a bankruptcy in which the player who was eliminated threw in the Queen, King and Ace of hearts, the 2 of spades, the Queen of clubs and the Jack of diamonds, the layout might look like this:

The possible single plays are still the same as in the diagram at the top of the page:

The first player who manages to play their last card is the winner. Players who have played all their cards drop out of the game and other players continue, skipping the turns of players who have no cards, until only one player is still holding cards.

There is no scoring as such in this version of the game, but the players are ranked as 1st, 2nd, 3rd and so on in the order in which they ran out of cards. A player who was bankrupt is automatically in last place. If there was more than one of these, the earliest bankrupt player takes last place, the second takes second last place and so on.

Shichi Narabe with a Joker

In this popular variant a Joker is added to the 52-card pack, so there are 53 cards in all. As usual all the cards are dealt out, the Sevens are arranged in a column and the player who was dealt the Seven of diamonds begins.

As an alternative to playing a card or passing as in the basic game, in this version the holder of the Joker has an extra option: to play the Joker in the position of the next missing consecutive card in one of the suit rows, and also play the next missing card after that in the same row continuing in the same direction. This play is only allowed if the player does not hold the card represented by the Joker. Whenever the Joker is played, the holder of the card it replaces must immediately place that card in the layout, taking the Joker in exchange and adding it to their hand. This does not count as a turn for the player who acquired the Joker: the player to the left of the one who played the Joker plays next.

For example in the diagram above, the holder of the Joker has the following additional possibilities:

Note that a player cannot use the Joker to replace a card they hold themselves, effectively playing two adjacent cards and keeping the Joker in their own hand. The above plays are only legal if the Joker player does not hold the skipped card, and thereby passes the Joker on to the owner of that card.

This is another popular variant, in which the left (Ace) and right (King) edges of the layout are considered to be adjacent. The two ends of each suit can be thought of as connected by a tunnel. In this variant when either half of a suit row has been completely filled with all cards of that suit up to the King or down to the Ace, the other half must be completed in reverse order. The next card played in that row must be the Ace or King respectively (if not already present), using the tunnel. After that, the cards of that suit are played in sequence from that Ace or King, progressing inwards towards the Seven. So the playable cards in each row are as follows.

In the diagram above, the

9 cannot be played. The next club must be the

K, followed by Queen, Jack, Ten and the Nine will be the last club to be played. In the other suit rows the playable cards are the same as in the basic game, but in hearts if the

J is played, the next playable card becomes the

2, since the Queen, King and Ace are already in the layout. After the Jack has been played the

4 is no longer playable until the 2 and 3 are in place.

This variant makes blocking tactics more risky and careful timing is needed. In the above example the holder of the

9 would like to have disposed of it before the

K appeared, since the 9 will now be the last club to be played.

It is possible to play with both tunnelling and a Joker. In that case, the Joker can used to complete the upper or lower side of a row along with the following card, which is now the furthest card from the Seven on the other side. In the diagram above if playing with tunnelling it is no longer legal to play Joker plus

10 because the completion of the 6-A side of the club suit has opened the tunnel, but instead it is possible to play Joker plus

J, with the Joker replacing of the

Shichi Narabe with a Ghost

TERANISI Isamu describes a variant in which a player who passes for a fourth time (and thereby becomes bankrupt and loses the game) is called a "ghost". The active players must try to avoid talking to the ghost, but the ghost makes every effort to start a conversation with an active player. If any active player does talk to the ghost, that player becomes the new ghost (and loser of the game) and must give their cards to the previous ghost who returns to the game and plays the hand surrendered by the new ghost.

This version ('Koroshi-no Shichi Narabe') is played with a standard 52-card pack with no Joker. As in the basic game, all the cards are dealt to the players and the holders of the four Sevens place them on the table in a column. Since in this game the arrangement of the suits is significant, either the Sevens should be shuffled together and arranged in a random order or a fixed sequence of suits, for example spades, hearts, clubs, diamonds, should be agreed in advance.

The person who placed the diamond 7 plays first. At their turn each player may either pass (a maximum of three passes is allowed as usual) or play a card horizontally or vertically adjacent to any card already in the layout. For example, if the first player plays the 8 of hearts and the next player plays the 9 of hearts, the following player can play the 9 of a suit that is adjacent to hearts in the layout. After a few turns the layout could possibly look like this: 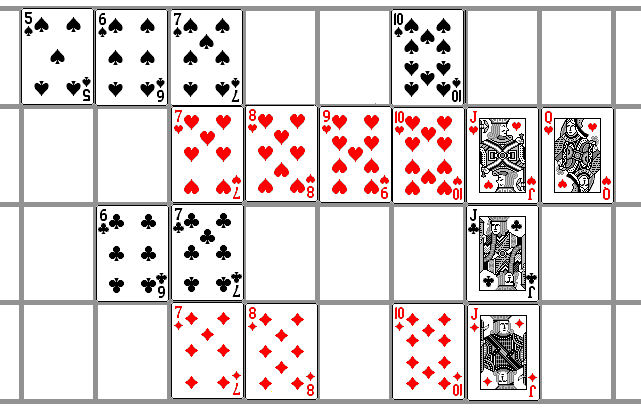 If a single cell is surrounded on all four sides by played cards or the edges of the layout, the card that belongs in that cell is 'killed'. The killed card can no longer be played and the owner must place it face up on the table in front of themselves as a penalty card. For example in the above position:

The configuration required to kill a card is similar to that used to capture a single stone in the board game Go. As in that game, four cards are needed to kill a card in the interior of the layout, three to kill a card on the top, bottom, left or right edge, and only two to kill a corner card - for example the

Q are sufficient to kill the

K, surrounding its cell with two cards, the top edge and the right edge.

A player who cannot or does not wish to play a card to the layout can pass instead. Each player is allowed three passes. If a player has used all their three passes and is unable to play a card at their turn, they must drop out of the play and place all the cards remaining in their hand in front of themselves as penalty cards - in this variant these unplayed cards are not added to the layout.

Players also drop out of the play when all their cards have been either played to the layout or killed. The others players continue, skipping the turns of players who have dropped out. This also applies to the last player holding cards, who continues to play the remaining cards from their hand to the layout.

The play ends when all the cards are either on the layout or displayed in front of the players as penalty cards. The player with the fewest penalty cards wins. If a number of games were to be played a running total could be kept of the number of penalty cards each player had placed over the series of deals.

There several possible variants of Shichi Narabe with Killing.

Thee Japanese MagicDoor website includes descriptions of several of the above versions of Shichi Narabe.