With thanks to William Gaul, Becky Beers, Tami Verdone and Mark Cornell for information about various versions of the game and board.

This game, played in parts of in the Eastern USA (North Carolina, Tennessee, and perhaps other places), is known by various names including Jack Foolery, Jack Off and perhaps others. It is played with cards, poker chips and a board which is home made from a second deck of cards which are cut in half and glued to a base to make a 10x10 board. A commercial version of the game was published by Jax in 1982 under the name Sequence. The object is to form rows of five poker chips on the board, by placing chips on the board spaces that correspond to cards played from your hand. 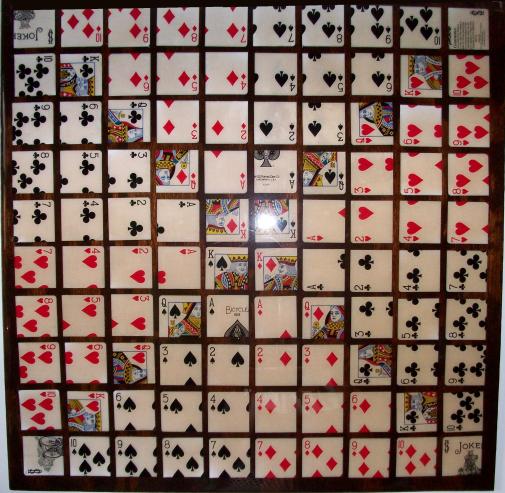 There can be two, three or four players. Four normally play as partners.

Two standard American 52-card packs without jokers are used - 104 cards in all.

Also a board is required made from another 52-card pack with two jokers from which the four jacks have been removed, leaving 50 cards. Each of the 50 cards is cut to make two square pieces which are pasted onto two cells of the 10x10 board - see illustration. The exact arrangement of the cards on the board is not critical except that the four joker spaces should be in the corners. Usually the cards are placed in some sort of symmetrical or spiral sequence, to create a pleasing visual pattern.

A supply of chips or counters is needed: about 50 each of two colours if there are two or four players; about 40 each of three colours for three players. These are placed on the board to denote which player or team owns a cell.

Players take turns in clockwise order, starting to dealer's left. At your turn you play one card from your hand face up on the table, and place a chip of your colour (or your team's colour) on an unoccupied space on the board whose card corresponds to the card you played. Then you replenish you hand by drawing the top card from the stock pile and it is the next player's turn.

Two-eyed jacks are wild. Playing a two-eyed jack (clubs or diamonds) entitles the player to place a chip of his or her colour on any unoccupied space on the board.

One-eyed jack kill your opponents' chips. Playing a one-eyed jack (hearts or spades) entitles the player to remove from the board any one chip belonging to an opponent.

Note: there are no jack spaces on the board.

The object is to form rows of five (or more) chips in an unbroken straight line - vertical horizontal or diagonal.

In a two-player or four-player partnership game the first player or team that has two straight rows of five chips of their colour on the board wins the game. These rows are allowed to intersect in one space, in which case only 9 chips are needed for the winning formation. Or a player or team can win with 10 chips forming two separate rows.

In a three-player game, the winner is the first player to form one straight row of five chips.

The basic rules are explained above, but like most traditional games, this one has many variations. The ones I know about are listed below. Players who know of other popular variants please let me know.

There are several ways to use the four joker spaces in the corners of the board. For example:

Some play that a card is drawn at the start of each player's turn rather than at the end.

Some allow the player of a one-eyed jack to place a chip on any space on the board, even an occupied space, replacing the token (if any) that is already on that space.

Some do not allow a one-eyed jack to destroy a completed five-chip row by removing (or replacing) one of its chips.

Occasionally a player will have a card in hand that is dead, in the sense that both spaces corresponding to that card are already occupied (at least one of them by playing a jack). Some allow the holder of a dead card to discard it and draw a replacement from the stock. This does not count as a turn. 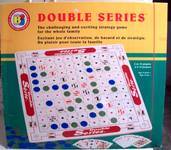 If you prefer to use a ready-made playing-board rather than make your own, several commercial versions are available.

You can obtain the Jax game Sequence from amazon.com. The set includes a board, cards, chips, and instructions for a version of the game.

Alternatively the game Double Series from the Canadian firm Jouets Bo-Jeux Toys comes with either a large wooden board or in a travel version using a pegboard.

In 2003 the Quinto Game Company released Quinto, which has the same board and play but adds an elaborate scoring system.