Australian Patience is basically a solitaire game, but can also be played competitively between two players. It comes from Australia, where some players prefer it as a more challenging alternative to better-known patience/solitaire games such as Klondike. I would like to thank Michael Doer of AussieCasinoHEX for introducing me to this game.

The aim is to build all the cards by suit onto four foundation piles beginning with the Aces. The moves are within the tableau similar to those in Scorpion, building downwards in suit and moving any column of cards whose top card fits onto the column it is moved to.

One-player Australian Patience is played with a standard international pack of 52 cards, each suit ranking from high to low K-Q-J-10-9-8-7-6-5-4-3-2-A. The player shuffles the cards and deals a tableau of 28 cards, consisting of 7 columns of 4 cards, all face up. Cards in each column are overlapped so that the first three cards dealt to the column are partly covered, leaving one end the card visible so that the suit and rank can be read, and only the fourth card of the column is fully exposed. The remaining 24 cards are stacked face down as a draw pile. Beside the draw pile there is space for a face up waste pile, which begins empty, and for four face up foundation piles, which also begin empty. An example initial layout is shown below. 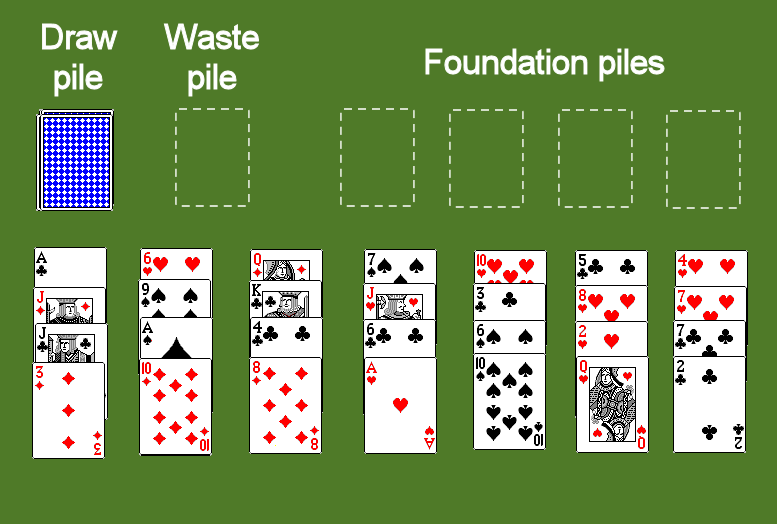 The possible moves are:

So some possible moves in the above illustration are:

In order to move the

Q, which is only possible when the

K has been moved away into an empty column. This could be achieved as follows:

9 in the layout onto which the

8 can be moved. Also the spade foundation cannot be started yet because the

A is covered by the

10, which cannot be moved onto the

J until there is a way to move the

The player wins if all the cards are moved to the foundation piles so that each is topped with a King. If any cards remain in the waste pile or tableau the player has lost.

Two standard 52-card packs are needed, one for each player. The packs must have different backs from each other, but should if possible be about the same size. The first player is chosen by any convenient method. For example each can draw a cards from a shuffled deck and whoever draws the higher card starts.

The two decks are shuffled separately - to avoid any suspicion of inadequate shuffling it is probably a good idea for each player to shuffle the other player's deck. Each player then deals from their own deck their own tableau of 28 cards, stacking the remainder face down to form their 24-card draw pile, with space for their waste pile beside it. Between the two tableaux there should be space for eight foundation piles, all of which are available to both players.

When the player has no more moves of type 2, 3 or 4 that they wish to make, they turn the top card of their draw pile and place it face up on their waste pile (move type 1). This ends their turn and it is the other player's turn to play.

When the players have no cards left in their draw piles, the game continues as before, but now players simply pass to end their turn. When both players pass in succession without making any further moves, the game is over. In this competitive game it is rare for all eight foundation piles to be completed - normally the players will have some unplayable cards left in their waste piles or tableaux at the end of the game.

In the simultaneous version, the setup is the same as for the turn-based version described above, but both players start playing at the same time and try to finish the game as fast as possible.

As in the turn-based game each player has exclusive use of their own tableau, draw pile and waste pile, but they can both play to any of the eight foundation piles. If both players try to play equivalent cards to the same foundation pile at the same time, whoever gets there first leaves their card on the pile, and the other player must take their card back and replace it where it was in their layout. They may later get an opportunity to play it on the other foundation pile of the same suit.

The game continues until neither player is able and willing to make any further moves. The cards belonging to each player in the foundation piles are then counted and whoever has contributed more cards to them wins.

On SolitaireNetwork, the solo version of Australian Patience can be online in a web browser.