This page describes a Rummy-like game played in Malaysia, using Chinese chess (Xiangqi) pieces as though they were playing-cards. The approximate meaning of the name is "making nines and pairs", which is a reasonable description of the objective. This page is based on information from Alexey Lobashev which in turn relies mainly on Hua Kiong's blog. Chinese pronunciations are in Fuzhou dialect.

It is played with the 32 pieces of a Chinese chess set. These are discs with the name of the piece written as a Chinese character on the front. The backs of the pieces are all blank, enabling them to be used like a deck of playing-cards.

There are two colours, red and black, and each colour has 16 pieces. The characters for the red and black versions of the same piece are often different. In this game the pieces have values from 1 to 8. The pieces and their values are as follows:

The pieces are thoroughly mixed face down. The players stack the pieces in pairs and arrange the stacks in a circle.

Next, to determine the player order, one of the players (usually the winner of the previous game) chooses any stack and turns both the pieces in it face up. This player then calculates the sun of the values of the exposed pieces and beginning with the player to his/her left as '1', counts the players clockwise around the table. The player corresponding to the total value, where the count ends, will be the starting player. For example in the illustration the total value of Horse + Elephant is 10, so in a 4-player game the starting player will be the player opposite the one who turned up the pieces. 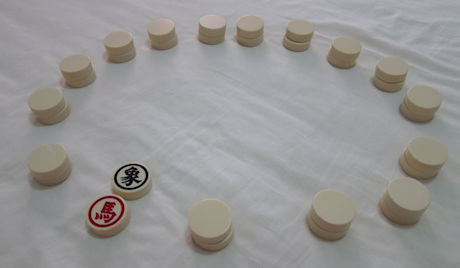 The starting player takes the two face up pieces, and the next player to the left takes one of the stacks next to the stack that was exposed. The next player in clockwise order takes the stack next to that one, and so on. The players take turns in clockwise order, continuing around the circle of stacks in the direction chosen by the second player, until each player has 2 stacks. The first player then takes a third stack (6 pieces altogether) and the other players in turn take once piece each from the following stacks, so that they each have 5 pieces.

All players put their pieces in a row face down in front of them. They look at their tiles, but do not show them to the other players.

Each turn consists of drawing one piece and then discarding one. The object of the game is to collect sets of two pieces that either match or add up to nine.

There are versions of this game, easy and hard, depending on exactly what counts as a set.

In the easy game there are two types of set:

In the hard game the only valid sets are pairs of identical pieces of the same colour, or a pair of value 2 (marshal and general). So in this version 帥將, 仕仕 and 士士 are valid sets but 仕士, 兵卒 and 象車 are not.

The starting player can immediately declare a win if already holding three valid sets. Otherwise the first player discards one piece face up.

Then the players take turns clockwise and each player in turn may either take the piece discarded by the previous player or the next piece from the table continuing in the direction of the distribution.

If any player after drawing, has six pieces that form three valid sets of two they can immediately declare a win and the game ends.

If the last piece has been taken from the table and no one has declared a win, then presumably there is no winner.

Acknowledgements. The images of Chinese chess pieces on this page are adapted from those used on the Wikipedia Xiangqi page and are distributed under the GNU Free Documentation License. The illustration of the distribution layout is borrowed from Hua Kiong's blog.