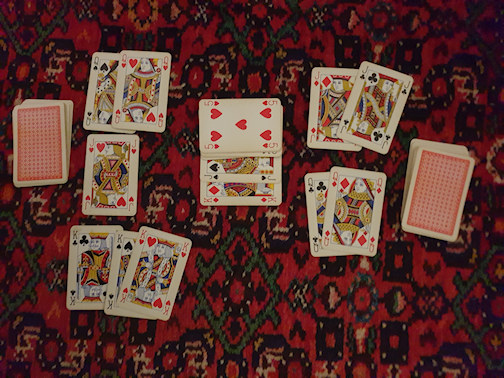 Money is a two-player card game found in several Arab countries, including Jordan, Syria and Egypt. The players hold their playing cards in a face down stack, and must play the top card of the stack at each turn. In this way it is similar to children's games such as Beggar My Neighbour or Snap. Players have no choice over which card to play next, but speed of reaction is important when capturing the play pile.

The capture method is similar to that of fishing games with a single play pile such as Xeri or Pishti: the pile is taken when the number of the card played matches the top card of the pile. The name of the game refers to the picture cards (K, Q, J) which are set aside and can be used to buy cards when a player runs out.

The basic Jordanian version of the game will be described first, followed by details of variants found in different countries.

This page is based on information collected by Sultan Ratrout.

This is a two-player game normally played with a standard international 52-card pack. In some variants two Jokers are added to the deck.

Suits are irrelevant. The picture cards are used as money to buy numeral cards. All other cards including Aces and Jokers (if used) count as numeral cards: they have no ranking order but match if the numbers are equal. The values of the money cards are:

The objective is to collect all the cards, money and number cards, leaving the opponent with nothing.

The dealer is chosen by any convenient random method. Before shuffling, all the picture cards (King, Queen, Jack) are extracted from the pack, and each player is given two Kings, two Queens and two Jacks, which they store face up in their money area or bank. That leaves 40 numeral cards (Aces count as 1's and have no special value), which are shuffled and dealt out equally to the players. Each player then has a stack of 20 cards which they must not look at, but must hold face down without changing their order.

The players take turns to play the top card of their face down stack to the playing area, which is known as the 'floor'. Each card is played by 'throwing' it to the floor face down and then turning it face up to reveal its value and adding it to the top of the 'play pile'. If the play pile is empty, which will be the case at the start of the game or if the previous play captured the pile, the played card begins a new face up play pile.

The pile is captured if the number of the played card matches the number of the top card of the pile. The player then takes the whole of the play pile, turns it over so that the cards are face down, and adds these cards to the bottom of the stack of cards in their hand, without changing the order of the cards.

If a player throws and turns a matching card but does not notice the match before their opponent throws and turns the next card, the opportunity to capture is lost and the pile remains in play. If a player throws a card that does not match but nevertheless attempts to take the play pile, then as a penalty the player's opponent can claim and take the play pile.

Buying from the floor

Buying from the opponent

If a player runs out of cards and there are fewer than 5 numeral cards on the floor, the player must buy numeral cards from their opponent. The player without cards pays with a King, Queen or Jack from their money area, their opponent adds this card to their own money area and gives the buyer the appropriate quantity of numeral cards, in a single face down block, from the top of the stack of cards in their hand. This becomes the buyer's new hand from which they now play the top card. The order of these cards cannot be changed.

Note also that the full value of a money card must always be given when it is used for buying or exchange. The buyer is not allowed to accept a lower value - for example just 8 numeral cards for a Jack.

Capturing Money from the Floor

Note that cards can only be thrown to the play pile from the player's hand, which always consists entirely of numeral cards. There is no possibility to use a card from a player's money area to capture cards. These money cards can only be used to buy cards when the owner runs out of cards in their hand.

The game ends when one player has collected all the numeral cards and money cards, leaving their opponent with nothing. The player who has all the cards is the winner.

Jokers. Some players add two Jokers to the game. These function exactly like numeral cards. Each player has 21 rather than 20 cards in hand at the start of the game. The Jokers match each other but do not match any other card, so a Joker only captures the play pile when the other joker is on top of the pile.

In Egypt the game is known in Arabic as floos, which means 'money'. Information on this version of the game was obtained by Sultan Ratrout from Mahmoud Ramadan and from the the website dotmsr.com. It differs from the Jordanian game as follows.

In Syria the equivalent game to Money is known as Buying-Selling. Details of this version were obtained by Sultan Ratrout from Abdul malik Fatayerji. It differs from the Jordanian game as follows.