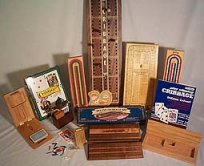 amazon.com stocks a selection
of cribbage boards and pegs
which can be ordered on line.

Cribbage is traditionally supposed to have been invented in the early 17th Century; it evolved from the earlier game Noddy. It is basically a game for two players, though adaptations for 4 players in fixed partnerships, and for 3 players also exist.

The more modern Six Card Cribbage has now almost entirely replaced the original Five Card Cribbage game described on this page. However the five card version does still survive in parts of Britain. For example, in South Wales it is played in pub leagues in combination with Nine Card Don (see the Don page for details). Matthew Probert reports that Five Card Cribbage is popular around Hampshire and Surrey, although the six card game is also played there.

Object of the Game

To be the first to score 61 points accumulated over several deals. Points are scored mainly for combinations of cards either occuring during the play or occuring in a player's hand or in the cards discarded before the play, which form the "crib".

The points are recorded by means of a board and pegs. The holes in the board represent scores from 1 to 61.

In any case, each player has two pegs: the forward peg shows the player's score to date, and the rear peg shows the previous score. When a player scores points, the rear peg is moved in front to show the new score. That way the distance between the pegs shows the amount most recently scored, and the opponent can thereby check it has been scored correctly.

Cut cards to determine who deals first. The player cutting the lower card deals, and the other player immediately pegs 3 points for "last" as compensation. This is scored on the first deal only. Subsequently the turn to deal alternates.

The dealer shuffles, the non-dealer cuts the cards, and dealer deals 5 cards to each player one at a time. The undealt part of the pack is placed face down on the table.

Each player must choose two cards to discard face down to form the "crib". These four cards are set aside until the end of the hand. Any card combinations in the crib will count for the dealer, so non-dealer will try to throw cards that are unlikely to make valuable combinations.

The non-dealer cuts the pack of undealt cards, lifting the upper part without showing its bottom card. The dealer takes out the top card of the lower part, turns it face up and, after non-dealer replaces the upper part, places it face up on top of the pack. This turned up card is called the "start" card.

If the start card is a jack, the dealer immediately pegs 2 points - this is called "two for his heels".

Play of the cards

Starting with the non-dealer, the players take turns to play a single cards face up in front of themselves. In this stage of the game the total pip value of the cards played by both players must not exceed 31. The pip values of the cards are:

As each card is played, the player announces the running total, but this total must not exceed 31. A player who cannot play without exceeding 31 does not play a card but says "Go". If your opponent says "Go" then you may continues playing cards and scoring for any combinations you make (see below). When neither player can play without going over 31 (either because both players have played all their cards or because all cards left in the players' hands have pip values so high that they would take the total over 31 if played), the play ends.

Scoring during the play

A player who makes any of the following scores during the play pegs them immediately.

Last Card:
If neither player manages to make the total exactly 31, whoever played the last card scores 1 point.

Players now score for combinations of cards held in hand. First the non-dealer's hand is exposed, and scored. The start card also counts as part of the hand when scoring combinations. All valid scores from the following list are counted.

15:
Any combination of cards adding up to 15 pips scores 2 points. For example king, jack, five, five would count 8 points (four fifteens as the king and the jack can each be paired with either five). You would say "Fifteen two, fifteen four, fifteen six, fifteen eight).
Pair:
A pair of cards of the same rank score 2 points. Three cards of the same rank contain 3 different pairs and thus score a total of 6 points for "pair Royal". Four of a kind contain 6 pairs and so score 12 points.
Run:
Three cards of consecutive rank (irrespective of suit), such as ace-2-3, score 3 points for a run. A hand such as 6-7-7-8 contains two runs of 3 (as well as two fifteens and a pair) and so would score 12 altogether. A run of four cards, such as 9-10-J-Q scores 4 points. This is slightly illogical - you might expect it to score 6 because it contains two runs of 3, but it doesn't. The runs of 3 within it don't count -you just get 4.
Flush:
If all three cards of the hand are the same suit, 3 points are scored for flush. If the start card is the same suit as well, the flush is worth 4 points. There is no score for having 2 hand cards and the starter all the same suit. Note also that there is no score for flush during the play - it only counts in the show.
One For His Nob:
If the hand contains the jack of the same suit as the start card, score 1 extra point.

Note that when scoring a hand, the same card may be counted and scored as part of several different combinations. For example if your hand is 7 8 8 and the start card is a 9 you score "fifteen 2, fifteen 4, and a pair is 6, and a run is 9 and a run is 12" - 12 points to peg, with each of your 8s forming part of a fifteen, a pair and a run.

After non-dealer's hand has been shown and the score pegged, dealer's hand is shown, scored and pegged in the same way. Finally the dealer exposes the four cards of the crib and scores them with the start card. The scoring is the same as for the players' hands except that:

As soon as someone reaches 61 points, that player wins the game. This can happen at any point - during the play or the show, or even by dealer scoring "two for his heels". Note that it is not necessary to reach 61 exactly - for example if you overshoot by scoring 2 more points when you had 60 you still win.

Here is the web site of the Salisbury and District Licensed Houses Cribbage League, where five-card cribbage is played.

Other versions of Cribbage: