This Chinese climbing game for five players is said to have originated in Shandong province, and in the early 21st century it has become popular across a wide area of northern China and online. Băo huáng (保皇) means 'protect the emperor', and the game is also often known as dìwáng (帝王) meaning 'emperor'. In each deal two players, the emperor and his protector the eunuch (xiao baozi: 小孢子), play against a team of three, the farmers or people (ping min: 平民). The emperor and the eunuch are the holders of particular cards. While the emperor is known from the start, his protector remains hidden until the card is played.

As in all climbing games the object is to get rid of one's cards (and help one's partners to do so) by playing them singly or in combinations, where each play must beat the previous play.

There are many variants of this game. The version described in the main account is fairly widespread, and is played for example in Rizhao (日照) in Shandong province. Alternative rules that I know about are summarised in the variations section. I would be grateful to hear from anyone who knows more about these or other versions of this game.

There are five players and a pack of 168 cards is used. This can be constructed from four standard 52-card packs from which the 3's, 4's and 5's are removed plus four red jokers and four black jokers. Suits are irrelevant in this game, and the cards rank from high to low:

One red joker and one black joker are marked on the front, and the holders of these two cards will be the emperor and the eunuch respectively. Although standard Anglo-American cards can be used, the game is sufficiently popular that special 168-card packs can be obtained for this game with the emperor and eunuch cards ready printed.

The deal and play are normally anticlockwise.

The cards are shuffled and stacked face down. As in most Chinese games they are not distributed by a single player. Instead, players take their own cards from the top of the pile, one card at a time, in turn, until all the cards are taken. The player to the right of the player who shuffled cuts the cards, and the next player to the right takes the first card. Since the number of cards is not exactly divisible by five, some players will have one more cards than others. Players hold their cards so that they can see their faces and their opponents cannot.

Holding a hand of as many as 34 or 35 cards will be an unusual experience for most Western players. In China, players often hold their cards in more than one row or in a sort of array with equal cards in a column, as in the photographs. 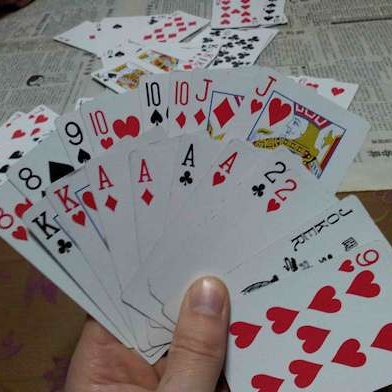 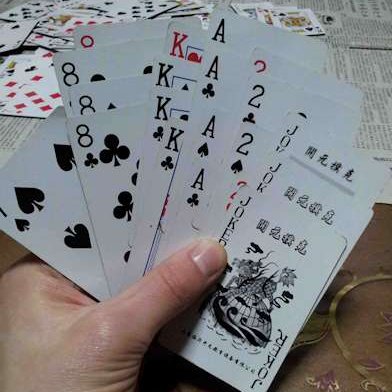 The identity of the emperor is always known, even if the card is not passed on, because the emperor begins the play. However, the emperor's partner and the common people may keep quiet about what side they are on. In this case the common people will not know initially which player is protecting the emperor: they may suspect who it is by observing who seems to be helping the emperor during the play, but it will only be known for certain when the marked black joker is played. However, any of the other players may choose to declare their allegiance, for or against the emperor, before the play begins, and this doubles the score for the game. When one of the common people declares, this is known as an uprising (zàofăn - 造反). In case of an uprising other players may declare or not as they wish without further affecting the score.

If one player holds both the emperor and the eunuch cards, this player will play alone against a team of four. The emperor may say nothing about this in which case the other players will not initially realise that this is the situation. Alternatively the emperor may declare before the start of the play that he or she is playing alone, and this doubles the score. If the emperor does not wish to play alone, this can be avoided by passing the emperor card to the left.

In the second and subsequent deals there is a penalty for the losers of the previous deal. After all the cards have been taken, the members of the team that lost the previous deal must each give away their highest card other than a joker: this will usually be a two. These high cards are placed on the table face down, taken by the members of the winning team and added to their hands. The emperor from the previous deal must give away his or her highest two cards (other than jokers) if the emperor's team lost, and takes two of the high cards offered by the farmers if the emperor's team won. An emperor who was playing alone will give or receive four cards in the next deal.

If the previous deal was a draw (zero score), no tribute is given.

The emperor begins by leading any single card or playable combination. All players, in anticlockwise order, may either pass - saying 'bùyào' (不要) or 'guò' (过) - or beat it by playing a higher card or combination. As explained above, each play must consist of the same number of cards, and must be higher than the previous play. This continues for as many circuits as necessary until no one is able and willing to beat the last card or combination that was played. When a play is followed by consecutive passes from all the other players, the player who played the last (unbeaten) combination begins again and is free to play any card or playable combination.

Note that passing does not prevent a player from playing at his or her next turn if someone else has played meanwhile.

A player whose play is currently unbeaten may ask the other players not to beat it, saying 'zhàn pái' (站牌). If the teams are not yet known this may provide a clue as to which side the player is on or may be deceptive. The other players do not have to comply.

As players run out of cards they drop out of the play and the others continue until all members of one or the other team have played all their cards. If someone plays their last card(s) and these are not beaten, the turn to restart the play with any card or playable combination passes to the next player to the right who still has cards.

When the emperor has a partner, each team's score is based on the order in which its players finished: +2 points for the player who finishes first, +1 points for second, 0 for third, -1 for fourth and -2 for last. So for example if the emperor's team come 1st and 3rd their score will be +2 (=+2+0) and the people's team will score -2 (=+1-1-2) for 2nd 4th and 5th. Each of the common people and the emperor's partner scores the amount scored by their team, and the emperor scores double. So in the above example the emperor scores +4 for the hand, the eunuch score +2 and the people score -2 each.

If the emperor's partner or any of the common people declare what side they are on before the play, the above scores are doubled.

If the emperor declares that he or she is playing alone, or if any of the emperor's opponents declares an uprising, these scores are doubled (+24/-6 or -24/+6).

Bao Huang is often played with the extra rule that sixes (the lowest cards) must be played last. In this version it is illegal to play a six until one's hand contains nothing but sixes. Sixes cannot be combined with jokers in this version.

The play in this variant is somewhat more challenging. In order to be first out of cards, it is necessary to keep a winning combination for your second to last play, so as to finish by leading all your sixes. If your second to last play is beaten, you are doomed to come last unless the player before you ends with an unbeaten set of sixes, allowing you to lead your sixes next.

Bo Huang is quite often played with four complete decks plus jokers, 216 cards altogether including the 3's, 4's and 5's. In this case the 3s are the lowest cards, followed by 4s, 5s, 6s, etc.

Passing on the emperor card

Some allow any player, before the start of play, to claim the emperor card from whoever has it and declare that they will play alone (score: 24 points, the same as when any emperor declares playing alone). Presumably the original holder of the emperor card can also do this if not requiring a partner.

Some play that the losing team place their highest cards (other than jokers) face up on the table, and these are taken by the winning team in order of their finishing position in the previous deal.

Some play that the marked red joker is higher than the other red jokers.

A few people play that a red joker can be beaten by three 2's.

A few people play that when a combination that includes jokers is played, it is only the jokers that have to beat the corresponding cards of the previous play. It is sufficient for the ordinary cards to be equal. With this rule, 9-9-9-9 can be beaten by 9-9-9-black, which can be beaten by 9-9-9-red. However, jokers have to be beaten, not just equalled, so a combination including a red joker is still unbeatable. Also, a set of ordinary cards can only be beaten by another set of the same rank if a joker is used.

Some players do not keep score. Instead the result of each deal is as follows:

Sometimes the entire game is played clockwise rather than anticlockwise.

Bao Huang can be played at the popular Chinese online site QQ games.

A set of rules in Chinese can be found at homygame.com.