Bandar Q is a simple Indonesian gambling game using dominoes. It is a game of pure luck. The banker and the players are each dealt two cards, and players whose cards are better than the banker's cards win while the others lose.

'Bandar' means banker and 'Q' or 'kiu' refers to the number 9, which is the maximum value of a pair of cards, as in the more elaborate game QiuQiu.

There are normally from 6 to 8 players, one of whom acts as dealer and banker.

The game uses one set of 28 Indonesian dominoes, which are best described as cards rather than tiles since they are printed on thick cardboard. Like Western dominoes they are about twice as long as they are wide, and each end is printed with from zero to six spots. There is one card with each possible pair of numbers from [0:0] up to [6:6]. The spots are normally red on a white background.

The players will need chips or money for betting, and the minimum and maximum bet size must be agreed in advance.

All the cards are exposed and the points value of each player's hand is compared with the value of banker's hand.

It is of course possible for more than one player to win in a single deal. Below is an example of the result of an online Bandar Q game where there were 4 winning players and 3 losers. The banker (top centre) has 6 points. The players at the top left (5 points), bottom centre (0 points) and bottom right (6 points) lose their stakes. The players at the left (7 points), right (7 points) and bottom left (8 points) win. The lucky player at the top right has 9 points and wins double. 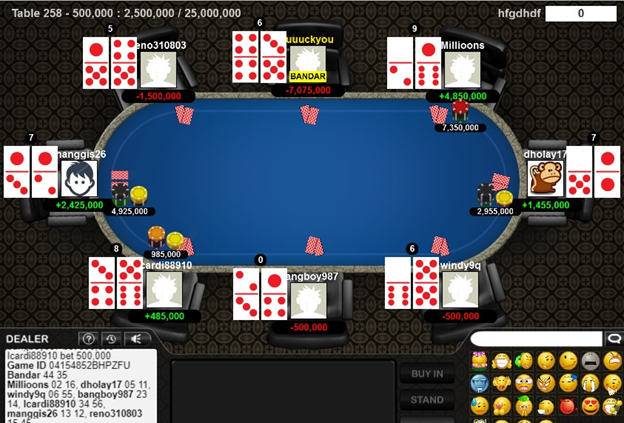 In Bandar Q the banker's advantage of winning ties is almost counterbalanced by the double win for a player who wins with 9 points (the banker never wins double). The net result is an edge for the banker of about 1.066%.

I am told that it is possible to play Bandar Q online at VipQiuQiu99.