Scoring and Other Equipment for Domino Games 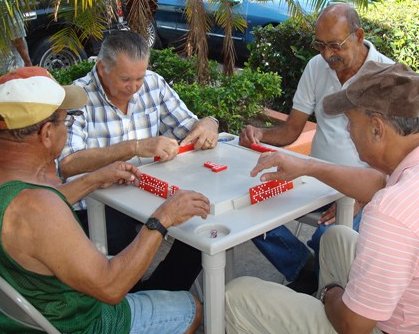 A card table with the traditional green felt surface is good for dominoes for the same reason that it is good for playing cards. The felt keeps the faces and backs of the tiles from getting scratched. The bad news is that tiles made with a metal spinner in the center can cut the felt surface and are better used on a hard surface where they might scratch the surface, but not the faces of the tiles.

In Puerto Rico special moulded plastic tables are used. The photograph to the right was taken by Jose Carrillo in Juana Diaz town square. They are also found in bars and other places where domino games are played.

Most domino players arrange the tiles of their hand in a semicircle on the table top in front of themselves by standing the tiles on their sides. Players with larger hands will hold the tiles in one hand, stacked side to side in a column. Most people are not physically large enough to handle more than six tiles at one time unless the tiles are very small.

A neater method is to use a tile rack, which is usually a bar of wood with a ridge and backstop cut into it to support a row of seven to nine tiles standing on end.

The domino set should come in a storage box of its own when you bought it. These vary from simple cardboard boxes, to the more common vinyl snap lock case. Some companies make wooden cases which have a cribbage board built into their lid.

For games which involve larger domino sets and tricks or captures, individual players might wish to have small narrow wooden or cardboard boxes which are open on the top and on one side. They measure the same width as the long side of the tiles in the domino set, about four tiles high and are long enough to hold many stacks of tiles. The tricks or captures can be stacked and placed against the back side of the box for easy counting later.

Most games can keep score on a sheet of paper, but these days, you might want to use a home computer to print out special sheets with rules or special scoring instructions for particular games.

The traditional cribbage board is a flat board with four rows of thirty holes arranged in two sets of tracks on the outside edges of the board. Each track is grouped in sets of five holes for easy counting. Each team or player has two pegs that fit into the holes. The pegs start off in two holes outside the rows. When a team or player scores points in the game, the first peg is advanced that number of holes on their outside track. The next time they score, the second peg is advanced that number of holes ahead of the first peg.

Afterwards, the pegs continue to leapfrog over each other until they get to the end of their outside row. The path of the pegs then turns around and goes back to the starting position along the inside track of holes. This means that one trip around the tracks records scoring sixty points (or 61 points, if you count returning to one of the starting holes).

There are two sets of five holes in the center of the board between the four rows. These holes can be used to mark the scoring of a complete set of hands in a game with another peg.

There are also non-traditional cribbage boards which are set up for four players or which have longer tracks in different bend into different patterns. People have also made special cribbage boards designed to keep score for particular games, such Bergen or 42, but I have not seen any commercially available.

One company made a simple counting frame for keeping scores in domino games. The product was more like a Russian S'choty than the Chinese abacus or Japanese soroban. Each wire in the frame had ten beads. The score keepers were sold in a package of four.

Poker chips are also handy for some domino games, in particular the Asian gambling games. The usual convention in the United States is to value the white chips as one unit, the red chips as five units and the blue chips as twenty-five units.

The size of the chips will vary depending on their use. Larger chips of various denominations are easier to handle for betting games. It is also handy to have chip racks for the players, so they can sort and stack their chips neatly. 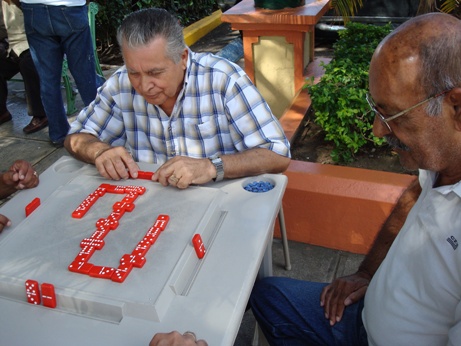 Smaller chips of one denomination are better for games in which chips are collected for points scored. A small wide mouth bowl or saucer can be used to keep track of these chips. British pubs also use match sticks as small chips.

In Puerto Rico poker chips with a value of 10 points are used for games in which an immediate penalty is paid for passing, such as Doscientos (200). Some players use coloured plastic jewels for this - as in the photograph to the right, which was taken in Juana Diaz by Jose Carrillo. The depressions in the corners of the table where scoring chips are kept were originally intended to hold beer glasses.

In some games, particularly Asian gambling games, a puck or special marker is passed around the table to identify one player as the bank or some other special status in the game.

Markers are also used in the Trains family of games to identify the end of a train whose owner cannot played upon it and to identify the last double played. Both situations have special rules in these games.

Dice are used in Asian games to determine which stack of tiles is dealt from the woodpile, but are not traditionally used in Western games. There are however a few Dice Matching Domino Games that make use of the fact that a domino can match a throw of two dice.

The doubling cube can be used as the puck in some Asian gambling games, such as Tien Gow, where payoffs can be doubled. This is a Western adaptation and not part of the original games.

It is possible to obtain decks of Double Nine Domino Playing Cards: standard size playing-cards with the normal arrangement of domino spots on the card face.

There are many types of Chinese doino cards. Typically these are narrow (for example 1.9 cm by 8.5 cm) with domino markings on both ends and a design in the center to separate the two halves. These decks have various compositions. A common type has four copies of each tile in the Chinese Domino set, which gives you 84 cards to the deck. A less common type has the same distribution of 32 cards as in a standard Chinese Domino set.

The Domino 32 Company (PO Box 79168 Waverley MA 02479-0168) sells a deck of American bridge sized playing cards (5.7 cm by 8.7 cm) with the Chinese Domino set markings and distribution under the name "Domino 32". The set comes with a rule book, play money and two decks of cards, one printed on gold stock and one on silver stock. The red and black conventions are preserved, but a small version of the tile's face in the corners, like the index on playing cards. The total pip count appears under this index. Each deck also has a "Red Ted" joker, which is marked with a clown face.

The United State Playing Card Company issued a deck of Bridge size cards in 1906 with gild edges. The deck is a double Nine, the face is a large domino face with a dividing line in the center. The indexes are done as a fraction that shows the orientation of the card (i.e. the [1-2] will be indexed with 1/2 and 2/1 depending how you turn the card). The single sheet of rules includes 42, Sniff, draw, block, Matador, Sebastopol, Bergen and simple fortune telling.

Cardinal Industries of New York has a set of smaller tiles (about one by two inches) with circular magnetic recessed into the center of their backs. They look like small refrigerator magnets. The tiles come in a folding box with a ferrous surface encased in a gray flexible plastic. The box unrolls to provide a playing surface.

SYU Creations of Cambridge, England also sells a smaller magnetic set which has a similar combination carrying case and playing surface, but the tiles in their product are made from the flexible plastic magnets used for business cards.