This is a solitaire game using a standard set of 32 Chinese dominoes. The name means "Passing Five Levels", which refers to the phrase "Pass five levels and cut six generals" from the novel "Riding a Thousand Miles" by Guan Yu from the Three Kingdoms period.

This page is based on a contribution from Dmytro Polovinkin with help from Min Fanxin (闵凡信).

The 32 tiles are shuffled and the laid out as follows.

The initial arrangement is like this (tiles shown with dark colour are face down)): 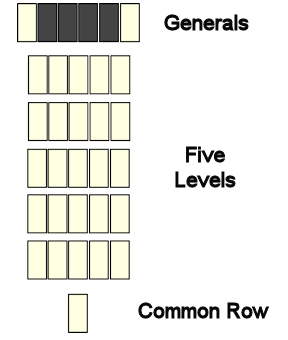 The play of the game is based on moving valid triplets, which are particular sets of three tiles

There are nine types of valid triplet, based on the combinations of six numbers on the six tile-ends: it does not matter how the numbers are distributed across the three tiles. The first three are triplets that include three equal ends.

The next two require four or five equal ends.

Each of the last four requires a spread of single numbers or pairs of numbers.

The play consists of three phases, which are repeated until the game is either won or lost.

The object of the game is to pass all five levels and cut all six generals. To achieve this, there must be exactly one occasion in the game when a level containing a single tile is used to cut two generals at once. When all the levels are passed and all the generals cut the player wins the game.

The game is lost if the common row is empty and there is no valid triplet of adjacent tiles in any of the remaining levels.

There is an more lenient version of the game in which the tiles removed from a level in step 1 of the play do not need to be adjacent. Any set of three tiles in a level that form a valid triplet can be moved to the left end of the common row.

Versions with no Generals

In his book, Chinese Games With Dice And Dominoes (1895) Stewart Culin describes a very similar game O-Koan (equivalent to Chinese Wu Guan - 5 gateways), presenting it as a method of divination. Five levels of four pieces are dealt, leaving a common row of 12 pieces, which are stored face down at the top of the layout. The player goes through the levels from bottom to top removing valid triplets, which can either consist of three adjacent pieces or of two pieces from one end of a row with one from the other end as above. The removed triplets are added to one end of the common row and when the player has been through all the levels, pieces are taken from the other end of the common row and one is added to the right hand end of each level that is not empty. The process is repeated until either all the levels are empty (success) or the common row is empty and no more valid triplets can be removed from the remaining levels (failure).

Another variant 通五关 (TongWuGuan) is similar to O-Koan except that it begins with 6 pieces in each level and just 2 pieces in the common row.

Version with one General

Another variant, created by 杨钧陶 (Yang Juntao) and improved by MinFanXin is called "七擒孟获" (Seven captures of Meng Huo). This has a single general [1:2] - called Meng Huo, seven levels with 3 pieces each and a common row of 10 pieces. The play is the same as in Guo Wu Gan.

Whenever the [1:2] is captured it is added to the common row, where it remains until reaches the other end of the row and is released during the level replenishment phase. At this point it is not added to an ordinary level but is moved back into the general's position by itself at the top of the layout. In order to clear a level it must have exactly two pieces that form a triplet with the general (empty levels that have not been cleared in this way are given a piece during the replenishment phase). Therefore the general must be captured 7 times to clear all rows and win the game.

Here is a blog showing the play of an example game. (The layout is shown with all six generals face up but in an actual game only the generals at each end of the row would be exposed at any time).

There is a description of the game in Chinese Wikipedia.