This domino game is played with a double 9 set in Lancashire and perhaps also in other parts of Britain. Each player builds their own line of tiles radiating from the starting double to form a star shape. If a player does not have a tile to continue their line they ask other players to sell them a tile that they can play. The name perhaps refers to the fact that these transactions require the players to be honest about what they need and what they have to sell.

There is very little documentation of this game. It is included in Arthur Taylor's Guinness Book of Traditional Pub Games with only a brief description and a note that in some places it is known as Stormy Castle. Like most traditional games it probably has quite a few variants. Below are descriptions of two different versions that have explained to me.

This version from Bolton, Lancashire was contributed by Joe Stephenson who learned the game from Terry Coleman.

There can be from 4 to 8 players. A double-9 domino set of 55 tiles is used. Each player also needs a pile of 20 chips or counters, which are used to keep score.

The tiles are mixed face down and each player draws a number of tiles depending on the number of players as follows.

This leaves from 6 to 11 dominoes which are set aside unseen and not used until the next shuffle.

Each player builds their own line of dominoes, end to end, starting from the centre tile and growing towards the player. As usual in domino games the ends of adjacent tiles must match. The tile next to the starting double which begins each player's line must match the number of the starting double. With six players the layout will look something like this: 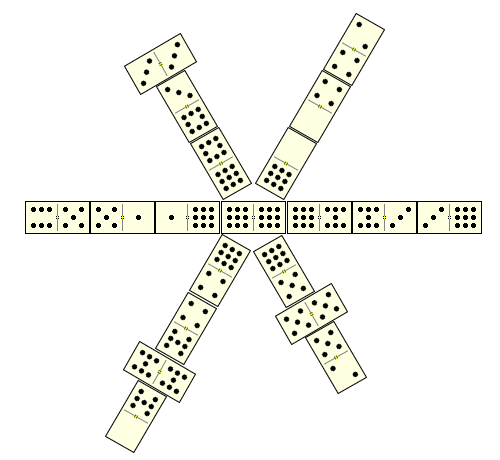 A player's turn consists of adding one matching tile to their own line, if possible from their own hand.

If a player does not have a matching tile they must try to buy one. First they ask the player to their left. If this player has a tile that matches they must sell it to the player who asked for it. The buyer adds it to their line and gives the seller one chip in exchange. If the seller has several tiles that match, the seller chooses which of them to sell to the buyer. If there is a choice, selling a double is a good idea, as the player will then have to buy another tile of that number at their next turn.

If the seller has no tiles that match, the buyer must ask the next player in clockwise order, and so on around the table, until they find a player who has a matching tile to sell. After the buyer has succeeded in adding a tile to their line, the turn passes to the next player to the left.

If no one has a tile that the buyer can use, they turn the last tile of their line face down to indicate that they cannot play any more tiles on their line and the turn passes to the next player. When a player is unable to continue their line their turn is skipped, but they can still earn chips by selling tiles to other players who need them. They may even win the round is they manage to sell all their remaining tiles before any other player runs out of tiles.

As soon as a player gets rid of their last tile, either by playing it on their own line or by selling it, the play ends and that player is the winner.

If a situation is reached where everyone still has at least one tile but none of the tiles held match any of the free ends of the lines, the play ends without a winner.

When a player wins a round by getting rid of all their tiles, they receive one chip from each of the other players. At the end of an agreed number of rounds or at an agreed time the game ends and the player with most chips is the winner.

This version was contributed by Russell Yates-Aylott.

The tiles are mixed face down and each player draws a hand of 9 tiles. The remaining tiles form a face-down 'boneyard' or 'draw stack' from which further tiles can be drawn during the course of play. The last 4 tiles are never drawn and remain face down until the next round.

In the first round of a game, the player who holds the largest double begins. Normally this will be the [9-9], but if no one has the [9-9], the [8-8] is called for, then the [7-7] and so on until the highest double is found. In the second and subsequent rounds, the starting double is the next double below the one that was used to start the previous round. So for example after a round started by the [6-6] the next round will be started by the [5-5] or if no one has it then the [4-4] and so on. The final round is started by the [0-0], of the game may end earlier, for example if after the [2-2] round when tiles are drawn it turns out that the [1-1] and the [0-0] are both in the boneyard. So the game consists of a maximum of 10 rounds, but fewer if some doubles are skipped.

In this version of the game their is an extra constraint. Whenever a new number appears in the layout, the double of that number must be played before any line ending in that number can be continued with any other tile. For example in the position below, West has played a [1-1] so can continue with any [1-?] tile. Since a [5-5] has already been played by East, North's line can be continued with any [5-?] tile. South and East both need a double 3 to be played to continue their lines. As soon as anyone plays a [3-3], both South and East be able to continue with any [3-?] tile. 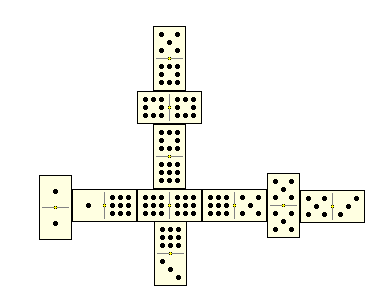 The holder of the starting double begins the round by placing it face up in the centre of the table, and must then play a matching tile on it if they can. Play then continues clockwise around the table from this player.

As soon as the player whose turn it is obtains a playable tile they must play it and the turn passes to the next player. If after drawing a tile and asking all the other players they find no playable tile, they must pass their turn and the next person plays.

The play ends when either

If a player managed to play all their tiles, that wins the round.

In case of a stalemate, the winner is the player with fewest pips on their remaining tiles, provided that that number is less than 10. (Rarely, in case of a tie for lowest pip total, there could be more than one winner.)

At the end of the game - when the [0-0] round has been played or the [0-0] was not found when called for to start a round - the player with the highest cumulative score is the overall winner.

The game can be adapted to accommodate more than 5 players by using a double-12 set (91 tiles). In this case the first round is started with the [12-12] or highest available double, and a game could consist of up to 13 rounds.

Russell Yates-Aylott has suggested using a double-18 set (190 tiles) for a game of up to 19 rounds, in which case the initial hand size should be increased and a rather large table will be needed to accommodate the layout.