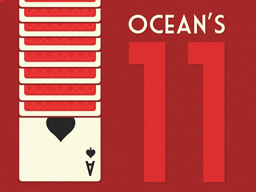 An ingenious two-player game by Eliott Adkins in which each player has a supply of 52 cards drawn one at a time and the object is to win the best of 11 poker hands.

A two player game using poker hands. Instead of betting players have to decide how to deploy their 52 cards to win the best of 11 poker hands.

Two standard international 52-card decks (one for each player).  Twos are wild, other cards have their usual ranking as in Poker.

Object of the Game

Be the first player to win 6 hands of poker.

To start, each player shuffles their individual deck, and flips the top card face up.  These cards form the start of each player's poker hand, and are compared.

Each time a card is revealed, the up-cards are compared to see which player has the stronger poker hand.  The player with the weaker hand must choose between two options:

If a player deals another card, the rows of up-cards are again compared to see which player is weaker, and the lower hand again has the same options as above.  If the two players have equally high hands, both must deal an additional card face-up.

This continues until one of the players concedes. All the face-up cards are then discarded, and will not re-enter play. Normal practice is for the player who won the hand (did not concede) to place one of the used cards apart from their discard pile, to keep track of the number of hands won. Each player then deals the next card of their deck face up to start the next hand.

There is no limit to the number of cards the player with the weaker hand may expose in an effort to win the hand, except that a player who runs out of cards is forced to concede, having no more cards to deal.

When comparing hands, each player makes their best five-card poker hand from the row of cards in front of them. If there are fewer than five cards, the hand is ranked as though the remaining cards are worthless non-matching cards with no rank and no suit. So for example, if we denote a worthless card as 'x', then 5-5 counts as 5-5-x-x-x, the lowest possible pair of fives. So 5-5 is beaten by 5-5-3, which counts as 5-5-3-x-x and wins against 5-5 because a 3 beats an x. One the other hand 5-5 is better than A-K-Q-J because A-K-Q-J-x is just an ace-high hand, which is beaten by a pair of 5's.

Twos are wild, but a player is not allowed to have two identical cards in their face-up row. Therefore there is no 'five of a kind' combination and a flush can only contain one ace. A wild card is exactly equal in rank to the real card it represents.

If the players tie for best 5-card poker hand but at least one player has more than 5 cards, the surplus cards are used to make a second poker hand to break the tie.

For example if player A has K, K, K, Q, 8, 5 and player B has K, Q, 8, 2, 2 then player A is winning because both have three kings with Q, 8 as kickers, but player A has an extra 5 which beats B's nothing. B would do well to deal another card now, since anything higher than a 7 will put B decisively ahead, creating either a four of a kind or a straight as B's best hand.

Another example. Player A has

2 and player B has

2. Who is winning? Player A's best hand is four queens and an ace, and all three of player B's twos are needed to equal that. Player B now has a king and a jack left over, and these are beaten by player A's pair of sevens. By dealing another card B has a good chance of making a straight flush which will be hard for A to beat.

End of the Game

The first player to win 6 hands is the winner of the game. It follows that once a player is at 5 wins, their opponent cannot concede a hand early unless they run out of cards. When a player runs out of cards, their opponent wins the current hand and then can win additional hands by simply playing one card from their stock, as long as their stock persists.  If both players run out of cards, the player with the most wins is the champion.  If they win an equal number of hands, the game is a draw.

Fewer or no wild cards

Some players have found that the wild Twos in the standard game are too powerful - when one player deals a Two the other player will quite often fold immediately.

Nick Wedd reports that the game is more interesting without any wild cards - there are fewer clear-cut decisions.

Eliott Adkins suggests an intermediate version played with a 54-card pack including two Jokers. The Jokers are wild but the Twos are natural cards.

Several people have experimented with versions of this game for more than two players. Each player has a full 52-card pack, and the object is still to be the first to win six poker hands. At each point the player with the weakest hand must choose whether to fold or flip another card. If there is a tie for weakest both (all) players involved in the tie must flip another card.

Some people call these variants Ocean's 12 or various other numbers depending on the number of players.

Eliott Adkins writes: "While testing, we did try this in a 3 and 4 player setting, where only the lowest must act, but we did find that the weakest hand would fold quickly, and let the others burn their hands down quickly...  It quickly became a dominant strategy to always fold it you were lowest of the three, until one opponent had 4 points (and maybe even to five), which led to a mandatory team up against that player, and very offsides hands. ... It could always be added as a variant, but to me at least it feels like a game that has to be 2 player."

Sue Paterson writes: "Five of us played two rounds of Ocean’s 15 at the end of the Go club the other day. Folding quick and early was a popular strategy but not always a successful one.  We had one or two hands where more than one player had at least one two and these were won with the best straight flush.  I think we’d play it again, it was fun."