Goal: Create "blocks" by enclosing areas on all sides with dominoes 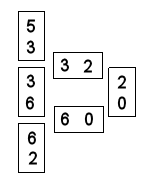 Avenue is vertical,streets are horizontal. Notice there is one completed block.

Note that tile 6-0 is not played correctly; 6-0 only borders one avenue tile. The avenue ending with 3-6 needs to be extended one more tile before a street can be formed. 1-2 is placed correctly; new avenues need only border one street. A tile can be placed connecting 5 and 1 at the top of the diagram; that tile would border two avenue tiles.

The black domino is correctly placed. It is connected to 2 avenue dominoes (north/south). It also completes an irregularly shaped block. The blue domino cannot be played; it is only connected to one avenue domino. Notice that the center avenue contains seven dominoes. It cannot be extended further north or south, however, a domino may be played in the middle.