This page is based on an anonymous sheet of rules discovered by Günther Senst, and on contributions from Fritz Bockstege, Jo Ann Wolff, Carol DeFur, Matt Schmitt and Chet Korff.

The game of Clabber (pronounced "klubber) is popular in Evansville, Indiana in the USA and other nearby places. Sharron Johnson reports that it is also played in Indianapolis. It is also sometimes known as Klob, Clob or Clobber, and sometimes as Dad, after the name given to a three-card sequence in suit.

There are many related games from other parts of the world going by names such as Klabberjass, Klaverjas, Kalabriás, Clobyosh and so on; also Belote. Several examples are listed on the Jass group index page of this site. These games share many common features but there are significant differences between them that give each game its own local character.

Clabber is usually played by four players in fixed partnerships, partners sitting opposite each other.

The pack consists of just 24 cards - Ace, King, Queen, Jack, Ten, Nine of each of the suits Hearts, Diamonds, Clubs and Spades.

The ranking of the cards is different in the trump suit, in non-trumps suits and when forming sequence melds (see below). In addition, the cards have point values, the object in the play being to win tricks containing valuable cards. The card ranks from high to low and their values are as follows:

The team that wins the last trick scores an extra 10 points, so that in the absence of melds, there are a total of 162 points to be played for.

A meld is a scoring combination of cards in the hand of a player. The possible melds in descending order and their point values are:

There is also a special kind of meld called Bell:

Note. In related European games, the three-card sequence is in some places known as "darda" and the king-queen of trumps as "bela" - this this the probable origin of the terms "dad" and "bell".

Partners and the first dealer are chosen by dealing the cards around face up to the players, one at a time, clockwise. The first player to be dealt a Jack will be the first dealer in the actual game. Further cards are dealt to the other players until a second Jack appears - whoever receives this is the partner of the player who received the first Jack. The players move seats so that partners are facing each other.

The dealer gathers the cards, shuffles them, and offers them to the player to the right, who must cut the pack, leaving at least four cards in each part.

Deal and play is clockwise. The dealer deals all the cards to the players, one at a time, so that everyone has six cards. The last card, which belongs to the dealer, is turned face up.

After the hand has been bid, played and scored, the turn to deal passes to the left.

The first round of bidding begins with the player to dealer's left. At your turn in this first round you can say, "I play", meaning that on behalf of your team you accept the suit of the dealer's face up card as trump and undertake that your team will take more points in tricks and meld than the opponents. Alternatively you can pass (sometimes indicated by knocking the table), in which case it is the turn of the player to your left to speak next. As soon as anyone says "I play", the bidding ends, and the cards are played.

If all four players pass in the first round, the dealer picks up the face up card and there is a second round of bidding, again beginning with the player to dealer's left. In this round, you can undertake to take more points than the opponents in a different trump suit of your choice. To do this you say "I play" and name a suit different from that of the card that the dealer had face up. If you don't want to do that you can pass again and the turn to speak passes to the left. If all four players pass in the second round of bidding the cards are not played and there is no score for that deal. The deal passes clockwise to the next dealer.

In order to play (name trumps), you must have in your hand at least one card of the trump suit you are proposing. If you say "I play" holding no trumps, your team is penalised as for a renege.

However, when a non-trump is led and you are following suit, there is no obligation to beat the cards previously played to the trick.

During the first trick, players announce meld - scoring combinations of cards that they hold. The team with the highest ranking meld scores all their melds, while the other team scores nothing for melds. The melds rank from high to low: 4 Jacks, 4 Nines, 4 Aces, 4 Tens, 4 Kings, 4 Queens, Sequence of 5, Fifty (sequence of 4), Dad (sequence of 3). No card may be used in more than one meld - for example holding

10 you score the four Queens only, not the Dad. Among sequences of equal length, the one with higher cards wins; if the rank of the cards is also equal, a trump sequence beats a non-trump sequence. If both teams have a sequence of equal rank and length in non-trump suits as their highest meld, neither team scores for meld on that deal.

In order to score any meld, the player must announce it just before playing a card to the first trick. If both teams have announced the same kind of meld as their highest, then at the end of the first trick each must declare the rank, and if those are equal, whether or not the meld is in trump. The members of the team with the highest meld must show all the meld that they declared just before playing to the second trick.

Infractions of the rules of bidding, melding and play are known as reneges. Examples are:

In case of a renege, the play ends, and the opponents of the team that reneged score 162 points plus meld.

If both teams renege in one hand, the hand is not scored and must be redealt by the same dealer. 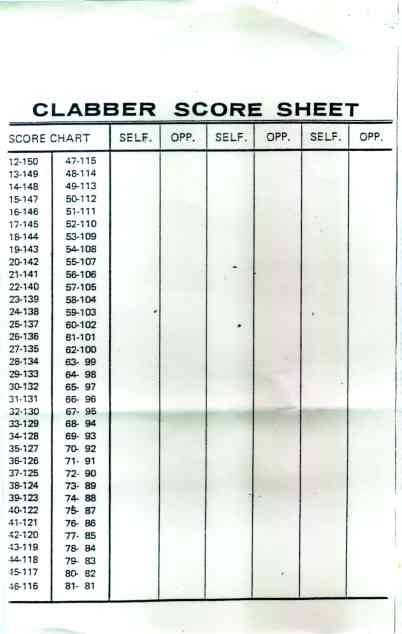 At the end of the play, the cumulative score for each team is recorded on a score sheet.

Each team totals the value of the cards in the tricks that they won, plus any score for Melds or Bell. The winners of the last trick add 10 points.

If the team that chose trumps by saying "I play" in the bidding has more points than their opponents, then each team scores the points they made.

If the scores are equal, or if the team that made trumps have fewer points than their opponents, the trump making team scores zero, written as "XX" on the score sheet, while the other team scores whatever points they won in tricks, melds and Bell. In this case the trump makers are said to be "set" or "hicked". The "XX" marks are sometimes known as "turkey tracks".

If the trump makers' opponents score no points, their zero is written on the score sheet as "-" or "~".

The game ends when either team's cumulative score reaches 500 points or more. The team with the higher score then wins: if they are equal the game is tied. This is recorded by writing a large "W" in their column of the score sheet.

Normally it takes about 4 to 8 deals to complete a game.

The scoring is generally done on special clabber score sheets given away by many shops as an advertising gimmick. These score sheets have two additional columns to check that the points scored by the two teams add up to the correct total.

Some play that if all pass in the first and second bidding rounds, the same dealer deals again.

In some groups, the cards are dealt two or three at a time.

When playing for stakes, some play that there as well as a stake for the game, there is an additional payment when the trump makers are "hicked".

Chet Korff reports that in Wadesville, about 15 miles west of Evansville, a sequence of six cards of a suit is recognised as a meld scoring 300 points. So far as I know this meld is not allowed in the standard game: in Evansville a player with a complete suit would just score 100 for a 5-card sequence.

Gail Cummings reports that some groups in Evansville rank the 100-point melds differently: a five-card sequence beats 4 of a kind, and the lowest 4's of a kind are 4 Tens and 4 Nines, so that the possible melds from highest to lowest are as follows:

As usual a higher sequence in the order A-K-Q-J-10-9 beats a lower one, a trump sequence beats an otherwise equal non-trump sequence, and the K-Q of trumps (Bell) scores 20 points independently of any other meld.

As far I can tell, on the basis of limited information, the three- and two-player games are played as follows:

There are two teams of three, each player sitting between two opponents. Four cards are dealt to each player. Bidding, meld, play and scoring are as in the four-player game.