This page is based on a contribution from Paul Eaton whose research included a field trip to North Friesland where he learned the game from members of the male voice choir “Frohsinn” in Treia at their traditional post-choir Bruus evening on Monday 2 March 2020, and from Bruus teacher, Dietrich Schoon, before participating in a local tournament in Schwesing on Tuesday 3 March 2020.

Bruus is a north German game which was probably invented over 300 years ago. Called Brusbart until the 20th century, it spawned a family of similar games that spread out all over northern Europe as far as Russia, Scandinavia and the Baltic states. By the middle of the 18th century, it was reported as being played by middle class women and the lesser nobility in Poland, by the German population of Baltic Livonia and by the peasantry in northern Germany, where a character in a 1781 play written in the Low German dialect declares that “my leevtes Spill is Bruusbaart!”  (“my favourite game is Brusbart!”). Brusbart probably reached its zenith around 1800 when it was Hamburg’s national game and was even the subject of a song which suggests that signalling between partners was an accepted part of, what was then, quite a boisterous and rowdy game.

Although signalling is no longer part of the game, it is one of several clues that point to its descent from Europe’s oldest card game, Karnöffel. These clues include the wildly disturbed ranking of its cards and the unusual role of the Sevens. There are, in fact, three families of games descended from Karnöffel which may be distinguished by the number of their chosen suits. These act like trump suits but contain cards with powers that vary from unbeatable to none. Looked at from that perspective, games of the Brusbart family have four chosen suits – every suit has cards with full or partial powers and cards which are effectively useless.

The known survivors of the family with four chosen suits, apart from the German game of Bruus described on this page, include Danish Brus, Gothlandic Bräus, Icelandic Brús in the valley of Svarfaðardalurand and the Greenlandic game Voormsi. Since the latter half of the 19th century, German Bruus appears to have been restricted to the Anglian peninsula and neighbouring Central Schleswig. Today, it is only played in a handful of villages in the hinterland of the fishing port of Husum, tournaments being held in Ahrenviöl, Immenstedt, Wester- and Oster-Ohrstedt and Schwesing. The “Frohsinn” male voice choir in Treia have played Bruus after choir practice since their foundation in 1881.

The rules have changed surprisingly little since then; terminology has changed, double and triple tricks have been added and there are slight local variations. The version given here is the game as played in Schwesing.

Four people play, two against two in partnerships. Partners sit opposite one another. There are 36 cards and nine tricks. The team which takes five tricks wins the hand. Won hands are scored using matchsticks. Game is 12 matchsticks.

The Cards and their Ranking 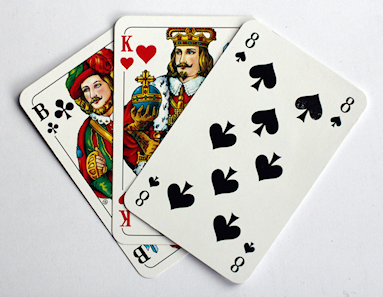 A 36-card, Berlin-pattern, French-suited pack is used, consisting of A-K-Q(D)-J(B)-10-9-8-7-6 in each of the suits clubs, spades, hearts and diamonds. Packs sold online for the games of Jass and Tapp are ideal, but these do not seem to be sold in north Germany, so they remove the fives, fours, threes, and twos from a standard 52-card Rommé or Poker pack. The suits rank from high to low clubs, spades, hearts, diamonds, as in Skat.

There are 3 matadors (oberste Trümpfe), in order from highest to lowest: the

J, known as Spitz; the

K, known as Bruus; and the

Next come the ‘beaters’ (Stecher or Stekers) which beat one another in rank and then suit order from highest to lowest as follows:

These 18 cards, the matadors and beaters, are collectively known as 'counters'.

The four Sevens have a special role. They are unbeatable when led to a trick except by a Seven of a higher suit, but when played to a trick in progress they cannot beat anything except a Seven of a lower suit. Thus for example the

7 can be beaten by the

7 and it can beat the two red Sevens. When led it cannot be beaten by any card other than the

7, and when played to a trick it cannot win unless one of the red Sevens was led to the trick.

The other 14 cards - the remaining Kings and Eights and all the Queens and Tens - are ‘duds’ (Luschen, Schietkarten or simply Schiet) and cannot beat any other cards, even those of the same rank or suit.

Deal and play are clockwise. The dealer shuffles the pack and offers it to the player to the right. There is then a ritual for cutting as follows: the cutter cuts the pack, examines the lowest card and shows it to an opponent; the dealer then completes the cut and examines the lowest card, showing it to an opponent. If either card turns out to be a matador, the pack is reshuffled. Once this procedure is over, the dealer deals three cards to each player in one packet and in turn beginning with forehand (the player to dealer's left). The remainder are placed face down to form the bunk (stock).

Forehand leads any card to the first trick, followed by the remaining players in turn. There is never any obligation to follow suit: players may always play any card to any trick.

The trick winner draws the top card from the stock; the others do likewise in turn. The trick winner then leads to the next trick. One player from each partnership collects the tricks for their team.

As soon as a team has one five or more tricks the play ends immediately and the deal is scored.

If the stock is exhausted, play continues in the same way, but without drawing, until one team has at least five tricks.

A player on lead who has two cards of the same nominal rank may play both at once. In order to beat this lead, a subsequent player must beat each card separately, beating only one does not count. The beating cards do not have to be of the same rank. Another player may beat the two cards that are currently winning the trick by beating both of them, and so on. So if a player leads two duds, for example two Queens, another player requires two beaters, for example a Six and a Jack, to beat the Queens and win the double trick provided these cards are not in turn beaten by others.

Two cards may be of the same nominal rank even though one is a matador. For example a player could lead

K to start a double trick, and this could only be beaten by the

J accompanied by a counter.

10, North beats this with

A, and East beats North with

9. Suppose that South's cards are

A. These cards cannot be used to win the trick because neither of them beats the

Example B. Suppose we exchange the card holdings of East and South. West leads

10, North beats this with

A and East plays

A. Suppose South's cards are

6. South cannot win this trick because only one of South's cards is good enough to beat the Aces. So South plays the Jack and Six and East wins again.

These examples illustrate that the winner of a double trick is determined not only by the ranks of the cards played to the trick, but sometimes also by the order in which they are played.

A player who after drawing has three cards of the same rank may lead them immediately to the next trick regardless of who won the last one. To win the triple trick, all three cards must be beaten separately, albeit not necessarily by cards of equal rank. If two players have three cards, positional priority applies. For example, East wins a trick and is on lead, but North has the

A, North can take over the lead and plays them. They can only be beaten by three higher cards such as

J. But if West also has 3 nominally equal cards, such as

8, West can claim positional priority (since it was East's lead, in the normal sequence of play West would have been the third player to the trick while North was the fourth player) and lead the Eights. North's three Aces cannot beat them, as none of them beats the Toller Hund even though, frustratingly for North, any of the Aces could have beaten the two dud Eights.

A double or triple trick counts as two or three tricks respectively for the team that wins it. The winner draws the next 2 or 3 cards, respectively, from the bunk in one go, followed by the other players in turn. If there are not enough cards in the bunk for all players to fully replenish their hands, players only take their share of the bunk.

Daring and striking (wagen und schlagen) are a key feature of the game. Playing the second or third highest matador (Bruus or Toller Hund) counts as a dare if the following conditions are all met.

A strike occurs if the next higher card is played to the trick by an opponent of the darer: in that case the striking team scores 2 points. If there is no strike, the dare succeeds and the darer's team scores 1 point. If the Toller Hund is dared and then struck by the Bruus, the play of the Bruus will itself be a dare (weiter wagen) if the four conditions above are met. In this case if the dare with the Bruus succeeds the team wins 3 points, two for the strike and one for the dare, but if the Bruus is itself struck by an opponent's Spitz the team that played the Toller Hund and Spitz score 4 points for the counterstrike.

The following points should be noted.

At the start of the game one player is nominated as the scorer (Schreiber) and given a box or tray of matches (typically one half of the plastic box in which the cards came). For each point scored, one matchstick is awarded. Points are scores as follows:

The male voice choir in Treia play to slightly different rules. The main differences are:

In the Schwesing tournament, players played three sessions of four rounds, each round comprising four deals, and players were randomly paired off in each session. Points won by a team were credited to both players so that each player ended up with an individual score at the end to determine the ranking. For example, suppose that a player scores 18 matches in the first session with one partner, the same player with a different partner scores 23 matches in the second session and then teams up with a 3rd partner for the final session, scoring 33 matches. The player's total score for the evening would be 18 + 23 + 33 = 74.

In the modern game, playing the second or third highest matador is automatically a dare if the conditions are met. However, it is clear from some historical accounts that in the past daring was optional. If the four conditions were met, a player playing the Toller Hund or Bruus had the choice to dare (scoring 1 or 2 points respectively if successful but losing the same amount in case of a strike) or not dare (neither scoring nor risking any points). For example, near the end of a game with each team needing just one point to win, a player who was confident that their team could take five tricks would not dare when playing a matador: istead of risking a strike that would lose the game it would be better to wait for the more certain point for taking five tricks.