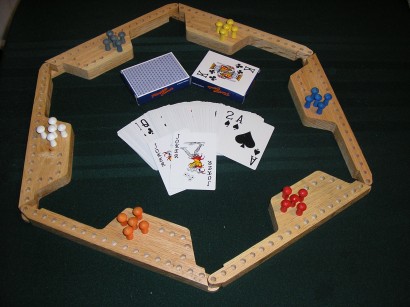 North American partnership race game for 4, 6 or 8 players in which cards are used to move pegs or marbles around a (normally home-made) board.

Pegs and Jokers is a North American race game for four, six or eight players, using playing-cards to move pegs around a board. It is also sometimes known as Jokers and Pegs. Some board designs use marbles instead of pegs as the playing pieces in which case it may be called Marbles and Jokers or Jokers and Marbles.

Pegs and Jokers is clearly derived ultimately from the Indian race game Pachisi, a race game using dice for movement, probably via its American derivative Sorry!, in which pawns are moved according to cards drawn from a special deck.

Pegs and Jokers is a partnership game played with standard playing-cards on boards that are generally home-made. It allows extra scope for strategy by giving players a choice of cards to play. Each player has five pegs, and the winners are the first team to move all their pegs from their START area to their HOME areas.

This page is mainly based on information from Bill and Barb Bigger and from John and Linda Bristol.

The players are divided into two teams - two against two, three against three or four against four. They sit alternately - each player seated between two opponents. At is also possible for 6 players to play as 3 teams of 2 or 8 players as 4 teams of 2, in which case partners sit opposite each other.

Standard decks of cards are used, with two jokers in each deck. Three decks (162 cards including 6 jokers) may be enough for up to six players: eight players should use four decks (216 cards including 8 jokers).

Four players use a four-sided board; six players use a six-sided board; eight players use an eight-sided board - one side for each player, each associated with a different color. Each player has five pegs in the color that corresponds to the side of the board nearest to them. Each side of the board has a straight section of track 18 units long: there is a corner hole at each end, shared between two adjacent sides, and 17 holes between them. The 8th hole after the corner is the "come out" position for the pegs on that side, and next to it is the colored "start" area with five holes where the pegs of that color are stored at the start of the game. The 3rd hole after the corner is the "in-spot" for that color, and branching off at the "in-spot" is a colored private track of 5 holes, which is the "home" or "safe" area or "castle", where the pegs end their journey. The diagram below shows one side of the board.

Here are four examples of boards: 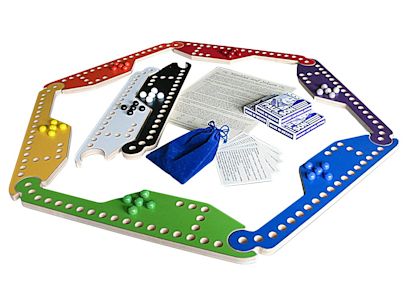 Marbles and jokers board by Wizard Woodworks. The black
and white board sections can be used to expand to 8 players.

Board made by Lonnie Beagles in sections that fit
together to accommodate any number of players. 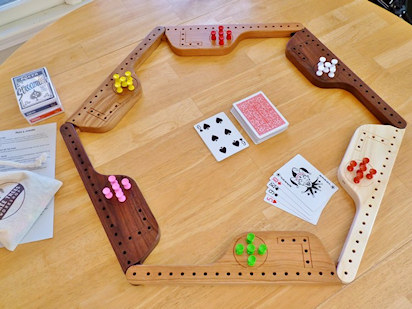 Pegs and Jokers board from the Three Trees workshop, with
interlocking sections made from four different hardwoods.

Board made by Bill Bigger following a design by Dave Vowells.
It has tracks for 4, 6 or 8 players on a single board: 8 players use
the outer track, 6 use the middle track and 4 the inner track.

Pegs and Jokers boards are available from Don Strenz Woodworking in Rochester, NY.

Wizard Woodworks, based on Whidbey Island, WA supplies boards in sections for 6 or 8 player versions of Pegs and Jokers and Marbles and Jokers.

Fine quality boards in sections for 4, 6 or 8 players are also available from the Three Trees Workshop in Warrensburg, MO.

Some people use coloured golf tees as the pegs for this game. Others use the small colored plastic bulbs that fit into ceramic christmas trees - supplies of these bulbs can be obtained from Ceramic Art Space.

Deal and play of cards

Five cards are dealt to each player, and the remaining cards are stacked face down. As usual players hold their cards so that they can see their faces but no one else can. Played cards form a face up pile on the table. Players take turns in clockwise order. At your turn you do the following:

If you have any card (except a joker) that allows you to move a peg, you must play such a card, even if the move is disadvantageous. However, if you have no cards (except jokers) that enable you to move you may discard one card of your choice without moving and draw a card to replace it. This ends your turn. Discarding without moving normally happens only at the start of the game, when a player has no aces or pictures to move any peg out of the start area.

A player is never forced to play a joker: if you have no other move you may keep the joker and discard another card.

All the pegs begin in their own start areas. From there they move to the neighbouring "come out" hole, and then around the board clockwise. On reaching its own "in-spot" a peg may take the branch into its safe "home" track. No peg may ever move into any start or home area other than its own.

In the basic game, except in special circumstances described below, you may only move your own pegs.

In order to move your peg out of your start area, you must play a jack, queen, king, ace (to move it to its "come out" hole) or a joker (to move it to the hole occupied by a peg of a different color anywhere on the main track).

When playing an 8, you must move one of your pegs backwards 8 holes.

When playing a 7, you may either move one of your pegs forward 7 holes, or split the 7 between two of your pegs, moving them 1 and 6, 2 and 5 or 3 and 4 holes forwards. Of course the split move can only be made if you have at least two pegs in play.

When you play a joker, you move any one of your pegs (for example one in the start area) into a hole on the main track that is occupied by another player's peg, belonging either to a partner or to an opponent. This has the effect of sending that peg to its in-spot or start area respectively, as described above. A joker cannot be used to move to an empty hole, so if there are no pegs of any colour on the main track a joker cannot be played.

You must always use the full value of the card played. For example when playing a 6 you must move a peg forward 6 holes, no less. If you play a 6 when you have a peg on your in-spot and all your other pegs in the start area, you must move your peg on along the main track, since there is not room in the home track for a move of 6.

For a team to win the game, all its pegs must be in their respective home areas. Pegs move along the home tracks in the usual way. Since they cannot land on or pass over each other, the first peg to arrive must eventually be moved all the way to the end of the home track to leave room for the others, the second to the next space behind it and so on.

However, it is legal to use a backward move on the main track as a means to get from start to home. For example: you could use a picture to move from the start area to "come-out"; use an 8 to move back 8 spaces to the corner (NOT into the home track); use a 4, 5, 6 or 7 to move forward into your home track.

The first team that manages to get all its pegs into their respective home areas wins the game.

This more interesting version of Pegs and Jokers developed in Arizona, from where it has spread to Texas and perhaps other places. It uses four full decks of cards including 8 Jokers. The rules differ from the basic game as follows:

Here is a brief summary of the Arizona Rules in the form of printable PDF. New players may find it useful to refer to this during their first few games. Brad Clark has provided a Spanish translation of the summary sheet.

Naturally a 9, like a 7, can only be split if your team has at least two pegs in play. If your team only has one peg left that is not in its final home position, then 7 and 9 can only be used to move forward that number of holes.

As in most card games, players are not allowed to reveal the cards in their hands to partners or opponents. It is sometimes very tempting to offer advice or suggest moves to your partners, or to seek advice when it is your move, especially when playing by the Arizona rules which allow players to move any of their team's pegs. This kind of table talk almost inevitably gives away information about the cards held by the players, and is not allowed in games between experienced players.

When teaching the game to beginners, this rule may be relaxed to allow possible moves to be discussed by the team. In this case, when discussing moves, players should do their best to avoid exchanging information about the cards that they hold.

Here the game is more often called Jokers and Pegs. The safe "home" area is known as the castle. The rules are as follows:

Some play that when counting you do not come out free until your fourth turn. Note that if while counting you have a peg that is in your castle but not all the way in, and you draw a small card that can move this peg, you must move it on that turn, and restart your count from 1 again on your next turn if once again unable to move.

Wade Wilkerson has provided detailed rules for this variant played in Florida. In summary, its charactertistic features are:

In the rule sheet distributed by Wizard Woodworks a two is a special card that can either moves a peg forward 2 or exchange two different coloured pegs on the main track. Other rules are in the basic game, except that as in the Arizona version players first play a card, then move and draw a replacement card at the end of their turn, and nines can be split, moving one peg/marble forward and another backward.

Eileen Becker from Alaska describes a variation in which a 10 can be used to move a peg either forward 10 spaces or backward 1 space. Apart from this the game is similar to the basic game described on this page, but using the "counting rule" from the North Carolina rules, allowing a player to come out with any card on the fourth turn after being stuck for three turns.

Susan McIntosh describes the 'Kilpatrick Rules' - a variant of the Arizona Rules with the following differences:

Ian Terry describes the Bluffing Joker variant, played in Florida, in which the basic rules are identical to the regular game, except that all cards played are played face-down. The player may declare the face-down card to be whatever they desire.

Before the player moves their piece, the opposing team has the chance to doubt the player's declaration. The next opponent player clockwise from the player whose turn it is has the option of doubting first. If no doubt is raised by the first opponent, it passes to the next opponent, and so on around the table.

If no doubts are raised, the peg is moved and the card is discarded, still face down, thus ending the turn.

If a doubt is raised, one of two things can happen:

Other Pegs and Jokers web sites

Here are archive copies of the former Pegs and Jokers page of the D'Antiques Board Games Database which included rules of the game.