26th July, 2015. Today, we are celebrating the 20th birthday of the world's most comprehensive web site documenting the rules of card games. The champagne is chilling in the fridge, and friends of the site's owner and editor, John McLeod, are gathered together to mark the event. We thought that since this is such a special day, our readers might like to know a little bit more about John, and the site, so May Walker persuaded him to give an interview.

Here's a picture of John in his office. 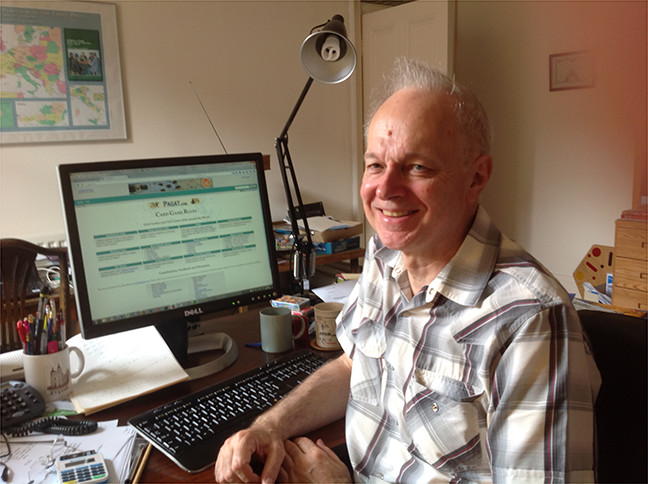 How did you start to get interested in card games?

I have been interested in them ever since I found out what playing-cards were. I persuaded my parents to teach me all the games they knew, but it seemed to me that there must be more possibilities. I read about other games in books and tried to persuade my family and friends to try them.

At university I found out that there were not only other games but also different kinds of cards, and when I met foreign students I asked them to teach me the games they played at home, which often turned out to be quite different from the games described in English card game books. At that time I began to gather a group of friends who were willing to try out the games we discovered. I found that there were people who collected playing-cards and set about trying to discover what games were played with the different types of packs they had found. This led me to start reading foreign card game books and older books that described games that were no longer played, and to travel to other countries, mostly in Europe, to meet and play with local players.

What inspired you to start a web site?

Since our group played quite a lot of different card games, many of which had not been properly documented in English before, I wrote down rules for many of them, for our reference. In the 1990's, when I found out about the worldwide web it occurred to me that a web page was the ideal place to store the rules of a card game. A website would be preferable to a book. Pages on different games could be of any length. They could be indexed and categorised in various ways. It was easy to update them or to add more pages as new information became available. And they were in principle accessible from anywhere.

Of the games I had learned and introduced to my friends one of the most popular had proved to be Austrian Tarock, which we had continued to play regularly since our student days. In this game one of the most important cards is the lowest trump, with Roman number I, known as the Pagat, so I gave the website the domain pagat.com in the hope that other people would discover this game and enjoy it as much as we did.

Do you work with other people to produce the content?

One result of publishing card game rules on the web was that I began to receive messages from card players all over the world about the games and variants that they played, many of which were new to me. Quite a lot of the pagat.com content is based on correspondence with these players. Where possible I like to publish rules that reflect actual practice, rather than rely on descriptions in books which may be inaccurate or out of date. The possibility to discuss the details of games with players in other parts of the world is an advantage that was not available to writers in the past. I always try to acknowledge those who have helped with information on each page, and on the policy page you will find a list of over 500 people who have made significant contributions.

What aspects of the site make it unique in your opinion?

I think it is unique in scope, really trying to present a representative collection of traditional card games from every part of the world. It also tries to give a really thorough description of each game - detailed enough to enable a group of card players with no previous knowledge of the game to teach themselves the rules and play it. Also I think there are no other sites whose editors are willing to engage in discussion about and accept contributions on all kinds of card games. This includes games invented and submitted by readers, of which we now have a large and ever growing collection.

The site has grown a lot over the years. In particular you now have a large German language section, plus other pages in different languages. How do you manage this?

This is thanks to various contributors and sponsors who have kindly translated pages into their own languages from time to time. Translating card game rules is not easy: as well as language and writing skills it requires a good knowledge of the technical jargon of card games in both language - really the translator needs to be a card player as well. The development of the German section is mainly thanks to the excellent work of our German editor Günther Senst. We would ideally like to publish editions in other languages as well, for example Spanish, if we could find an editor with the time, skills and inclination to take on this role.

How is the site funded?

My aim has always been to make this information on card games of the world as widely available as possible and to encourage feedback. Therefore all the pages of pagat.com are free to read. As the site became popular I was approached by various people wishing to advertise on the site, and this has been our only source of revenue. We are very grateful to our advertisers for their support, but we also consider it important that advertisements should not interfere with the usability of the site, which is why they are normally placed only at the top or bottom of pages.

What has the impact of new technology been on the site?

I have always tried to keep the design of the pages simple and functional, and only to use features that are supported by all web browsers in general use. When we started in 1995 the most popular browsers were Netscape 1 and Lynx. Even tables were not yet generally supported, so tabular layouts had to be created using preformatted text. With modern HTML and CSS for styling we have far more flexibility, but with over 1500 pages to maintain it can take a while before all are updated to take advantage of the new possibilities. Our website manager May Walker has been enormously helpful in making the page designs more attractive yet still practical and flexible. For example we have to ensure that the layouts work for a wide range of screen sizes since at least half our readers are using mobile phones or tablets. It was actually relatively easy to make the site mobile friendly because of the very simplicity of its design, so there is an advantage in not being too sophisticated in one's use of technology!

How do you see things developing going forward?

More games. For me this always seems the highest priority. Clearly the collection can never be complete, but when I started pagat.com I imagined that after some years I would have covered most of the traditional card games that exist, and that new information would come in at a slower rate. I have not reached that point. There are at least 200 more traditional card games for which I have enough information to publish pages and a similar number for which I have new information and the pages should be revised or rewritten. This is a lengthy process. The rules for each game need to be arranged in a logical order and checked for accuracy, clarity and completeness. In most cases this involves combining several sources of information which may well be inconsistent in some details, and generally there are several different variants that need to be covered.

Navigation and classification. There are various ideas of ways to make the website easier for readers to navigate and use. A glossary of card game language would probably be useful, and the classified index could be improved. What people seem to want most is a classification into good and bad games, but different people like different types of game, and most of the games on the site come with a recommendation from the contributor that it is the best card game they know. I have started to post my own recommendations on the home page and we might take this further by trying to recommend the best games of various types or for various numbers of players. Perhaps we should provide a way for readers to rate games, though players' preferences differ so much that the result might not be meaningful.