Despite its name, this is a Caribbean domino game, played in Jamaica and perhaps on other islands. It features a cross-shaped layout begun with a double.

This section is based on information from Sean Thomas of JamDom.com.

There are four players, each playing for themselves (cut throat). A standard [6:6] domino set of 28 bones is used. The direction of play is anti-clockwise.

The 28 bones are thoroughly shuffled face down on the table, and each player draws 7 bones.

Play continues anti-clockwise. At their turn, each player must play one bone: if they have no bone they can play they must pass.

Four bones with a blank end must be played against the four sides of the posed double before any other bones can be played. This creates a cross-shaped layout with four arms. The next bone played on each of these arms must be the matching double. An arm can be further extended by matching the number at its end provided that the double of that number has been played. However, whenever a new number appears at the end of an arm, it cannot be extended further until the double has been played. 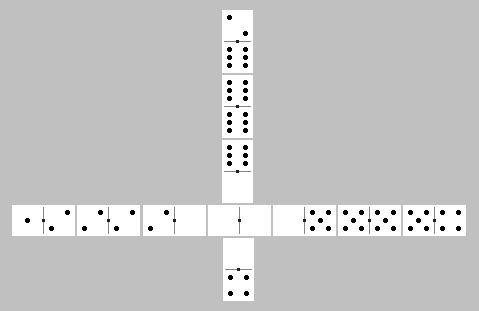 In French Dominoes a player must play if able to do so. Passing when able to play incurs a penalty.

At the end of each hand the total number of spots on the bones in each person's hand are added to their running score. A player who ends the play by playing their last bone scores zero points. The aim is to score as few points as possible.

If any player still holds one or more doubles when the play ends, that player's score for that hand is doubled.

During the play any player who passes 3 times in succession has 10 points added to their score. After this, the player's count of consecutive passes is reset to zero. In the unlikely event of a further 3 consecutive passes, another 10 points would be added.

If a player plays a bone in such a way that no other player can play, so that all the other three players have to pass before the same player plays again, then the three passing players each score 10 points. This is known as a board pass.

There is also a 10-point penalty for a player who passes when able to play or tries to make an illegal play.

The game ends when one or more players reach a cumulative score of 100 or more. The player with the lowest score at that point is the winner. In case of a tie for lowest score an additional hand is played to decide the winner. Players with scores of 100 or more are losers and players other than the winner whose scores are below 100 neither win nor lose.

Since the [0-0] has no pips it scores no points. A player who had the [0-0] as their only remaining bone when the play ended would therefore score twice zero, which is still zero, the same as the winner. To avoid this anomaly, some count the [0-0] as worth 10 points rather than 0, so that a player ending with the [0-0] alone would score 20 (2×10).

At JamDom.com you can play several styles of Jamaican dominoes online. Videos on the Cut Throat and French styles are available.