Longana is Cuban domino connecting game played with a double-9 set. There are normally four players, each of whom is responsible for one arm of a cross-shaped layout. It is said to be an ancestor of Mexican Train.

This page is based on a description that was first published in the Game Cabinet, contributed by Megan Cytro as taught to her by her husband's grandfather Louis Perez, who played regularly at the Centro Asturiano in Tampa, Florida. They had been watching the film The Buena Vista Social Club where in one scene the musicians play dominoes while taking a break, and when asked about it, this was the game Mr. Perez showed them.

Longana is played with a double 9 domino set of 55 tiles. It is best for four players, but it is possible for two or three to play. The score is kept using paper and pencil.

The direction of play is counterclockwise.

The dominoes are shuffled thoroughly face down and each player draws eight. The remaining tiles are not used.

In the first deal of a game, the player holding the highest double begins by playing it. Subsequently the winner of the previous deal begins by playing a double of their choice. If they have no double the next player to the right begins, if they have no double either the following player and so on. [If no one has a double, the tiles are thrown in and reshuffled and the players draw again.]

In the play, each player is responsible for playing an arm of connected dominoes extending towards them from the side of the opening double that is nearest to them, so that a cross-shaped layout is formed. The players take turns in counterclockwise order, starting to the right of the person who played the starting double.

As usual the numbers on touching domino ends must be equal. For example if the starting domino is the [8:8], the first tile played against each of the four sides must have an 8 touching the double. If an [8:3] is played on one side, the 8 will be next to the double and the open end will be a 3: the next tile in that arm must have a 3 on one end that touches it, and the other end must be matched by the next tile on that side. Throughout the game doubles are laid crosswise, but do not cause the arm to branch. See diagram below. 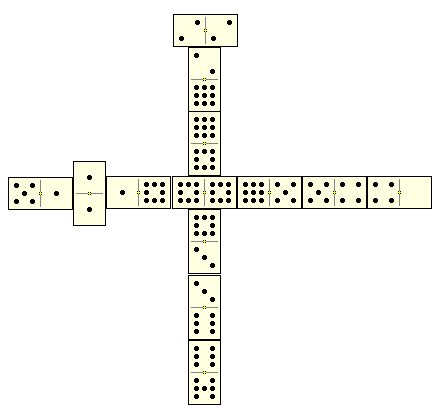 Each player, at their turn, plays one tile. This may be:

A player who is unable to play must pass, and it is only after a player has passes that option (c) becomes available. Their arm is then opened for other players to extend. [It may be convenient to mark this by placing a token of some kind at the end of their arm.] If a player who has passed subsequently plays a tile - either on their own arm, or on the arm of another passed player, or a double anywhere - their own arm is immediately closed again [the token is removed] and other players cannot extend it except with a double.

If two or more players have passed with the same number (6, for example) on the end of their arm and their arms are still open, then any other player who plays one one of those arms must play on the arm of the first of those players who passed.

The play continues until someone wins by playing all their dominoes, or until no one is able to play. The score is then calculated and written down, and if no one has yet won all the dominoes are shuffled face down and the players draw new hands to play again.

The person who played all their dominoes scores the total number of spots on the other players' unplayed dominoes. [The description does not say what happens if a game is blocked: all players have dominoes and no one can play on any of the four arms. Possibly there is no score, or more likely the player with the lowest number of spots on their unplayed dominoes wins and scores the total of all the unplayed spots.]

A cumulative score is kept for each player. Further deals are played until a player wins by achieving a score of 100 points or more. (At the start of a game players may agree a different target score, for example 50 for a shorter game.)

Players normally begin by lining up the best string of matching dominoes they can make to begin their own arm, taking care to keep this secret from the other players. Where possible they get rid of the remaining dominoes by playing doubles on other players' arms or taking advantage of the possibility of adding to the arm of a player who has passed. Good players keep track of what has been played and what numbers their opponents have passed on, and use this knowledge to block other players from playing their dominoes.