Dominoes-Matrix is a game for two or more players depending on the size of the domino set used. Players aim to gain points by creating “cells” (empty spaces surrounded by dominoes) and also scoring with specific “double figure combinations” on the playing surface. The player with the most points scored when the last piece is played wins. A standard set of dominoes (double 6) is used in this illustration but larger sets such as double-9, double-12 or double-15 can be used.  There are three game options based upon how the tiles containing blanks are played.

Setting up the game and the basics of play:

After shuffling the stock with tiles face down, each player draws two tiles.

When putting down tiles, the following rules are followed. 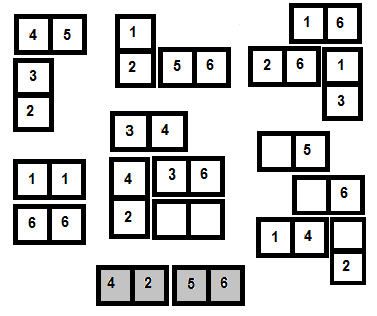 Throughout this text, the diagrams illustrate play with a double six set. Illustration 1 shows examples of individual and multiple tile arrangements, with all joins using a sum of seven. The use of ‘blanks’ as “wild cards” using Game Option 1 is also shown. An incorrect method of placing tiles end to end (shaded tiles) is shown for reference only.

Illustration 2 shows Game Option 2: Blanks may only be joined to each other. Some examples of this feature are shown in graphics A and B. Note that the shaded [3:0] tile in graphic C would be illegal as played here.

Creating and scoring with ‘cells’

The main aim of the game is to create enclosed spaces upon the playing surface; each ‘cell’ has the area of one half of a domino tile. One point is scored for each cell created. The following illustration shows examples of cell creation.

Placing a tile so that both end numbers of the played tile create a sum of seven with at least one adjacent tile will score one point. There are two main ways of doing this: playing a doubles alongside a complementary double, such as [6:6] next to [1:1] or [3:3] next to [4:4], or playing tiles with different ends that adjoin two different tiles on the layout. Illustration 4 below shows the method using ‘doubles’. 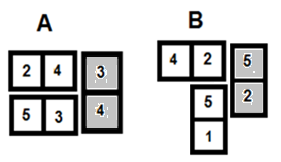 Note: double figure scoring is made by the action of placing a single tile. Regardless of the number of connections made only one point is scored by doing so - see the [1:5] tile in the game scenario in illustration 8.

Illustration 6: The placing of a blank tile may not be used to score a double figure combination in either Game Option 1 or 2. However, a player may use blank tiles to set up further combinations when playing Game Option 1.

Note: In Game Option 2 ‘blank’ tiles’ may not be used to create or set up double figure combinations. For Game Option 3 rules, see Addendum at end.

Illustration 8 shows a game in progress under Option 1 rules: 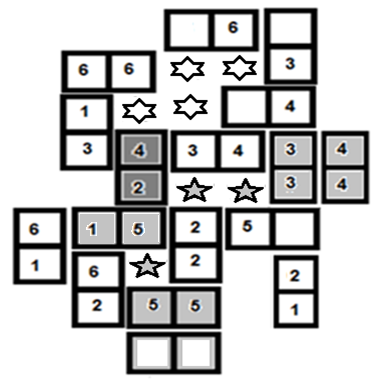 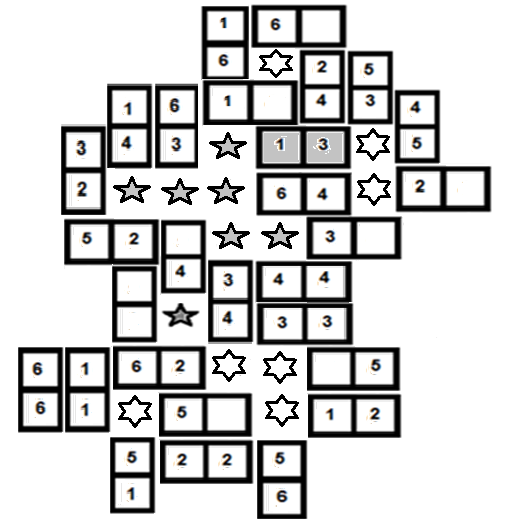 The first tile put down was the shaded [1:3]. Player 1’s cells are shown with the five pointed stars and Player 2 has the six sided stars.

In Game Option 3 the tiles with blanks are used as wild cards but their value is determined by the numeral that it is in contact with.

Connecting blank tiles to other blanks with Game Option 3

Illustration 11: Connected blanks are zero as is the case with Game Option 2.

Creating double figure combinations in Game Option 3 is possible if the value of the blank has already been determined by the placing of a numeral against it - see Graphic A, B and C of illustration 12.

However, Graphic D shows that it is not possible to make double figure combinations if the blanks are valued as zero as the only value the tile marked with an X can have is also zero.

In graphics B and C, a double figure combination is scored if the [5:2] tile is placed last, against those already on display.

In graphic A, the double figure score with the [5:2] is only possible if the values of the two blanks have already been fixed as 5 and 2 (by the 2-tile above and the 5-tile below) before the [5:2] is played. Illustration 13 below shows some ways in which this configuration could develop.

Game openings are likely to be cautious with players aiming to hinder each other’s attempts at scoring. But it is a game of chance as much as it is tactical and a player can only work with what is in hand and what they believe others are likely to play.

As the layout develops tiles will start to form patterns that can readily connect back to the main body of the Matrix.  In such cases a player is likely to be forced to place a tile that opens up chances for others to score. Being aware of what tiles have been used and those still awaiting play is crucial for success at this stage of the game.
Taking opportunities with “double figure combinations” is a good way of keeping a points tally ticking over. The thoughtful use of ‘double figure’ tiles is vital as placing a single ‘double numbered tile’ in open territory is likely to be punished.

The double six sets are adequate to provide two players with a challenging game of Matrix; double nine sets being ideal for games of longer duration or where three to four people play and double twelve sets being used where more than four play.

For younger players it may be advisable to draw out a lined grid on paper or another material so that the tiles can be easily aligned when placed on the playing surface.