This page is based on a description by Günther Senst, who learned the game from Jutta Breckwoldt and Inga Schuldt on a cruise with the AIDAdiva from 13th to 27th November 2009.

Fipsen is played in and around Prisdorf, a town to the north of Hamburg, Germany. It seems to be declining in popularity. Fipsen tournaments are run simultaneously with Skat tournaments and formerly there were 3 to 7 four-player Fipsen tables; nowadays there are generally not more than 2 or 3 tables, and the players are mainly of the older generation. Jutta Breckwoldt learned Fipsen from her grandmother, so it must date from the 1920's or earlier.

Fipsen seems to be closely related to the English game Nap (short for Napoleon), particularly to the modern variation with a "floater". However, Fipsen has so many characteristic rules that it must be counted as a separate game, rather than a Nap variation. As in Nap, the aim is to score points by winning at least as many tricks as you bid.

There are four players, each ultimately playing for themselves. On each deal, the highest bidder will play alone against a team consisting of the other three players. Deal and play are clockwise.

There is a three-player version of Fipsen, but this is played only when it proves quite impossible to find a fourth player. The four-player game will be described first.

The dealer shuffles and the player to dealer's right is entitled to cut the cards, but often chooses not to. A batch of three cards is dealt to each player, then two cards face down to the table, then two cards to each player, so that each player has a hand of five cards. Three cards are left over, and these are set aside face down, and are not used except in the case of the special bid Kieker. The two cards that are dealt to the table are known as the Skat (as in the game of that name).

The bidding determines which player will play alone against the other three.

Each of the following causes the game value to be doubled:

If Vorhand bids, the game is his unless it is taken away by another player bidding higher. The next player to his left can either bid higher or pass. If the second player bids higher Vorhand can "hold" the bid (undertaking to play an equally valuable game himself) or he can pass (relinquishing the game to the other bidder) or he can bid higher.

A higher bid is a bid for more tricks, or a bid for the same number of tricks with more doubles. In the bidding, tricks always have priority over doubles. An example of an ascending sequence of bids is: 2 - 2 Hand - 2 Ruten Hand - 3 - 3 Hand etc. Some bids are of equal value - for example 3 Hand and 3 Ruten, since Hand and Ruten are each worth one double. Therefore neither of these overcalls the other, and a player who holds 3 Ruten can play 3 Hand and vice versa.

The bidding between Vorhand and the next player continues until one of them passes. Only when this happens does the third player speak, either bidding higher than the last bid or passing. The bidding then continues between the third player and the survivor of the bidding between the first two, the earlier bidder always having the right to hold, and when this is resolved the fourth player can bid against the survivor or pass.

It is not necessary to begin with the lowest possible bid, or to make the minimum bid needed to overcall another player during the auction. The first bidder can start with a bid of more than 2 tricks, and this is often sensible. For example, if you expect to win at least 3 tricks you should bid 3, to increase the basic value of your game. The winner of the bidding can score extra doubles by playing without the Skat, making diamonds trumps or winning every trick, but the number of tricks bid and the basic value of the game cannot be increased after winning the bidding.

If all four players pass, the cards are thrown in and the same dealer shuffles and deals again.

If the final bid was a simple number, 2, 3, 4 or 5, the bidder can pick up the two Skat cards, add them to his hand, and discard any two cards face down. He then chooses and announces the trump suit.

Alternatively, the bidder can play without looking at the Skat, which doubles the value of the game (Hand Game), and simply announce the trump suit. The bidder may choose to do this even if "Hand" was not mentioned in the bid, but if the final bid included "Hand", the bidder is not allowed to use the Skat.

Vorhand leads to the first trick. Players must follow suit if able, and a player who cannot follow suit may play a trump or a card of any other suit. The highest trump, or if none are played the highest card of the suit led wins the trick and the winner leads to the next trick.

When the bidder has won the number of tricks that he bid, he can either stop and just claim his points, or if he has not yet lost a trick he can continue the play by leading to the next trick. If he continues, he is considered to be attempting a Durch. He must now take all the tricks to win the double score for Durch. If he loses a trick, he loses the Durch. For example if the bid was 3 and the bidder looked at the Skat, he can stop after winning the first three tricks for 3 points, or he can carry on to win 6 points if he takes all the tricks or lose 12 points if he loses a trick.

If the bid was 5, it automatically includes an announced Durch, so in the absence of other doubles the bidder wins 10 if successful and loses 20 if not.

"Ruten" is the Low German form of "Raute" (=rhombus) and in this context refers to the diamond suit.

If the bidder chooses diamonds, the 7 is the only trump. This makes the game harder to win than a game with an ordinary trump suit, and because of this, a double is applied to the game value. In the bidding, a bid in Ruten is therefore always higher than the equivalent bid in an ordinary suit. So a bidding sequence could be 2 - Ruten 2 - 2 Hand, Ruten - 3 - etc.

It is not necessary to mention Ruten in the bidding in order to play Ruten. If Ruten is bid, diamonds must be the trump suit, but a player who has not bid Ruten may still choose diamonds to increase the value of the game if, for example, he finds the seven of diamonds in the Skat.

A player may even choose diamonds as trumps when he does not hold the 7 of diamonds, and try to win his game with aces in the other suits. This is somewhat risky though, as an ace might be trumped by one of the other players who holds the 7 of diamonds and no cards in the suit of the ace.

Kieker is a special bid that ranks between 4 and 5. The verb "kieken" is a Low German form of "kucken" (to look) and the player who bids a Kieker looks at all five face down cards.

A player is allowed to (but is not obliged to) bid a Kieker if his hand contains no pictures - no kings queens or jacks. If the Kieker wins the bidding, the player must briefly show his cards to another player, usually the opponent to his left, to show that the bid is legal. He then picks up the Skat and the three cards that were set aside at the end of the deal. He now has a hand of ten cards from which he discards any five cards face down and announces the trump suit. In order to win he must win all five tricks.

If the cards the Kieker picked up were so poor that he judges he has no chance of winning, he may give up before the first card is led for -5 points. If he plays he wins 10 points if successful (5 tricks, doubled for Durch) but loses 20 points if he loses a trick.

If at any stage - after the deal, after picking up the Skat, or after picking up five cards in a Kieker - a player holds all four sevens and an ace, this is a Siebener Fips. The player announces it lays these five cards on the table and scores +30 points. This outranks all other bids. 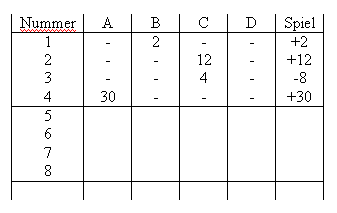 The scoresheet has six columns:

The bidding, play and scoring remain the same. In the deal eight cards are set aside instead of three, which increases the luck factor.

The procedure for a Kieker is slightly different in a three player game. The bidder throws away his original five-card hand and picks up the Skat and the eight cards that were set aside. From these ten cards he discards another five cards face down. He then names trumps and must win all five tricks as usual.