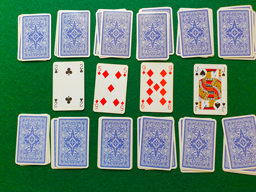 A popular children's game in which players race to collect packets of four equal cards by exchanging cards one at a time with a row of four face up cards on the table.

This children's game seems to be of fairly recent origin - I have not yet seen it described in any card game books - but is already quite widespread. The players race to collect packets of four equal cards by exchanging cards one at a time with a layout of four face up cards.

The game is popular in California but I have also come across players in Sweden, Britain and Finland. It is usually known as James Bond, but there are also people who call it Atlantis or Chanhassen. Mikko Saari reports that in Finland it is called Lännen nopein (Fastest in the West). Probably it has other names in other places. In each case the name of the game is what you shout to claim that you have won.

This page is based on information from Melanie Giedlin, Lydia Healey, Julia Holm and Cory Cregan.

A standard 52-card international pack (without jokers) is used. Usually there are two players but it is also possible for three to play.

The cards are dealt into face-down piles of 4 cards in front of the players: 6 piles for each player when two play, or 4 piles each if there are three players. The last four cards are placed face up in a row between the players.

When everyone is ready, the dealer yells "Go!", and play begins. Players pick up one pile at a time, look at the four cards, and if they wish they can exchange a card from the pile they are looking at for a face-up card from the table, the aim being collect four cards of the same rank in each pile - for example four sixes or four queens.

For example, if the pile you are looking at is 4, 4, 7, and K (suit doesn't matter), and the four face up cards are 4, 6, 3, and J, then you might want to trade either the 7 or the K for the 4. Whether you release the 7 or the King will depend on what you think your opponent has. If you saw him/her take a King earlier, then you may want to hold onto your King and play the 7.

Play is simultaneous - there are no turns - everyone plays as fast as they can. However, a player is only allowed to look at one pile at a time. The pile you are holding must be put back face down on the table before can pick up and look at another pile.

You cannot exchange more than one card at a time. If you want two cards from the middle, you must first exchange one card, then another card. There must be four cards in each pile and four cards face up on the table after every exchange.

The first player who manages to collect four matching cards in each of their six piles shouts "James Bond" and turns their piles face up, to show that they have won.

Some players say "book" each time they complete a pile of four equal cards, and "book, James Bond" when they complete the last pile. Saying "book" is not required, in fact it may be a disadvantage to give away this information. Players who feel they are ahead do this to put their opponent under pressure.

The word used to claim a win varies from place to place. "James Bond" seems to be the most widespread, but some use other words such as "Chanhasse" or "Atlantis".

Some groups allow more than one card to be traded simultaneously. For example if you see 4-4-8-9 face up on the table, you would be allowed to grap both fours at once in exchange for two cards from the pile you are currently playing.