Chicken Foot seems to have originated in Texas or Mexico. It is a version of Maltese Cross with a double 9 set of 55 tiles, or sometimes with a double 12 set of 91. The game begins in a cross format from the opening double, so that there are initially four free ends. Dominoes are played with touching ends matching in number as usual. Doubles are played crosswise, and after a double is played the next three plays must be next to the double. These are spread out slightly like the toes of a chicken's foot, forming three new ends of the layout. The object as usual is to be the first to play all your dominoes.

The following description is based on the rules provided on the Domino Plaza website by Aron Wall, Dick Fisher, and Eric Simon.

The game normally uses a double nine or larger domino set. The game is for two or more players, but seems best with four or more. It is possible for two or three players to use a double six set, and with a large number of players a double twelve or larger set can be used.

The number of dominoes drawn each player at the start of the game depends on the number of players and the size of the set. Recommendations vary, but Puremco, one of the largest domino manufacturers has provided the following table:

The tiles remaining after players have drawn their initial hands form the boneyard, which is called the "chicken yard" in this game. The layout or tableau formed by playing tiles is called the "barnyard".

All tiles are played on an arm of the tableau and must match numbers in the usual manner. Doubles are all spinners, but have rules of play different from spinners in other games, which we discuss shortly. The initial double must have tiles played on all four arms before any arm is extended by a second tile on it.

A player unable to make a play on the table must draw a tile from the chicken yard as his turn. If this tile can be played, the player may do so at once. If there are no tiles remaining in the chicken yard, a player who cannot play simply misses a turn, and the next person plays.

Doubles are always placed crosswise across the line of the arm. When a double is played, the player must declare "chicken foot" or "chickie" to warn the other players that special rules are in effect. The toes of the chicken foot -- the open arms of the spinner -- must be filled with three more dominoes before tiles can be played elsewhere in the barnyard. The toes are tilted away from the center of the barnyard, to give the appearance of a chicken's toes, thus. 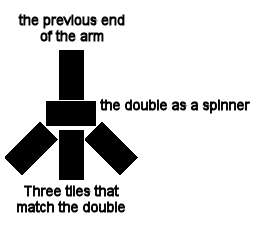 This helps to keep the lines of the arms from running into each other. After the chicken foot is completed, the game may proceed with plays on any open arms. This growth pattern tends to make the tableau look like a tree diagram or organizational chart.

Note that the "chicken foot" rule - that a double must have four matching tiles next to it before any further tiles can be played - also applies to the initial double of the round, even though it is not at the end of an arm of the tableau.

A player with one tile left in his hand may announce this fact as a courtesy, but it is not required.

The hand ends when one player dominoes or the hand blocks (the chicken yard is empty and no one has a tile that can be played). Each player gets the total number of pips left in his hand. The [0-0] is worth 50 points (in one variation, The [0-0] counts only 25 points).

The game continues until one player reaches or exceeds a predetermined (large) total; this player loses, and the player with the lowest score wins. The object of the game is to score as few points as possible.

It is a good idea to play a double when another player has a single tile left, to force that player to draw another tile.

Watch which doubles have not been played and try to save a tile in those suits as protection.

Chickenfoot can be played against computer opponents at Online Domino Games.