This game is a member of the Fives Family. Dominic C. Armanino states that this game originated in Europe, but it is now more popular in the United States, and many American players regard it as the standard form of dominoes. It is also sometimes known as Double Six, Muggins, Five Up or Single Spinner, but here we use the name Muggins for the game played without a spinner and Five Up for the game in which all doubles are spinners.

The game uses a double six domino set. It can be played by two to four players, but is best as a four handed partnership game. A cribbage board is useful for scoring, since scores are totaled as they are made and not at the end of the hand. If no cribbage board is available, the score can be kept on paper.

The size of the hand varies with the number of players:

The rest of the tiles form the boneyard.

The four handed game is usually played in partnerships.

The first player in the first hand is determined by lot. In the following hands, the player who dominoed (ran out of tiles) in the previous hand plays first. If the last hand was blocked, then the lead is again determined by lot. The lead can be any tile in the player's hand.

The hand continues until one player dominoes (plays their last tile) or until all players are blocked.

The first double (spinner) is scored in the same way. Both ends count until tiles have been placed against both of its sides. When the second tile is played against the spinner, the spinner no longer contributes to the score: only the tiles at the two ends of the layout count, just as if the spinner was another tile placed in line. This can be confusing because the ends of the spinner are still open for setting other tiles.

When the third tile is played against the spinner, creating a new arm extending from one of its ends, this third arm also counts towards the total, and when the fourth arm is begun by by extending the other end of the spinner all four ends count.

Example. The diagrams below show the first nine moves of a possible game. The black arrows show the directions in which the layout can be extended, and the red stars show the tile ends that contribute to the total, which must be a multiple of 5 for the player to score for the move.

When a double is at the end of an arm, both ends of the double are counted, but only until another tile is played extending from the free side of the double. 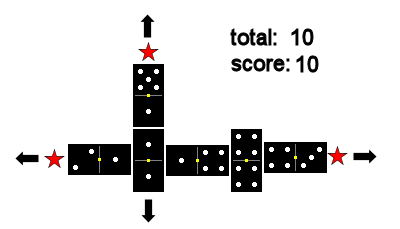 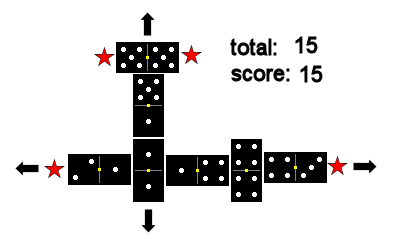 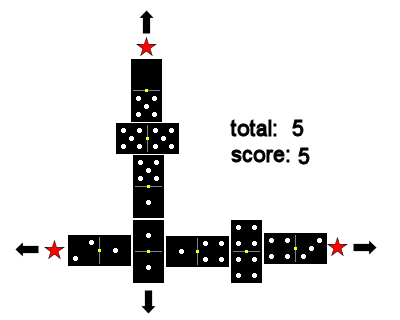 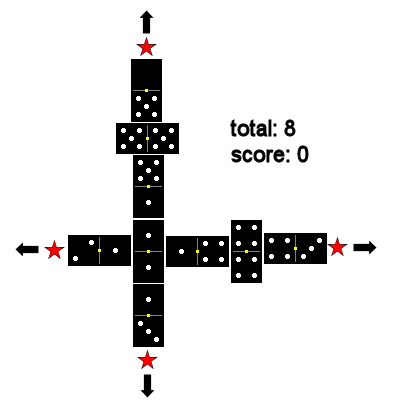 When the hand ends, because some player runs out of tiles or the layout is blocked with no further plays possible. If a player runs out of tiles, that player (or that player's team) is considered the winner of that deal. If the game is blocked the player or team with fewest points on tiles remaining in hand is considered the winner. The winning player or team scores the total of the pips on the tiles remaining in the opponents' hands, rounded up or down to the nearest multiple of five. For example, in a two-player game a losing hand with just the [1-2] would round up to five points, while [1-1] would round down to zero points.

If there is a tie for least points in a blocked two-player or four-player game no one scores for the remaining tiles. In a three-player game if two players tie for least they split the third player's points between them.

The game is played up to an agreed number of points, usually 250 points for two players and 200 points with three or four players.

It is common to divide all the scores by five, so that for example a total of 15 on the ends of the layout scores 3 points. The game can then be scored on a Cribbage board, and the winning target is 61 points.

N.W. Holsey and Ken Tidwell describe an elegant method of scoring on paper. It begins with two lines crossing to form a large X Each line is worth 5 points so the X represents 10. Further points are represented by a small x in each of the four spaces around the large X: again each line is worth 5 and each small x 10, so that when the four small x's are complete the whole symbol is worth 50 points, and a new large X is begun. A score of 10 obtained in a single turn can also be represented as a small o rather than an x made up of two fives. This method of scoring is quick, reliable and easy to read. The example below represents a score of 75.

You will find many local variations as to how to pick the first player for a hand, what tiles can be led, what score to play to, and the size of the hands. These are not significant changes in the basic game. One European source gives this table for the size of the hands:

The rest of the tiles form the boneyard.

Some play that the last tile or the last two tiles in the boneyard can never be drawn. If the boneyard is reduced to one (or two) tiles players who cannot play must pass and if all pass the game is blocked.

Some play that a player or team must reach the target score (for example 61 on a cribbage board) exactly in order to win. This can happen during the play by playing a tile that makes a multiple of five on the ends of the layout or by scoring for the opponents' tiles at the end of a game. If a player overshoots by scoring too many points at once - for example 4 points from a score of 58 - those points are not scored and the game continues.

Some play that at the end of a hand each player or team subtracts the total pip value of the tiles remaining in their hands, rounded to the nearest five, from their running total. This variant does not lend itself so well to scoring on a cribbage board or with Holsey and Tidwell's X's.

This is one of the best domino games, because the strategy is complicated, but play is fast. Here are some general hints:

As in any domino game, the player who can count the outstanding tiles has a strong advantage.

Beginning players have trouble doing the required math in their heads. They will tend to think in terms of arms which end in 5, instead of looking for other combinations that give a multiple of five. Also, beginners do not think of reducing the previous total to a multiple of five.

When you have the lead, play a tile worth ten points ([5-5] or [4-6]) if possible to score early. Otherwise, play a double that gives you control the arms of the tableau.

When another player draws a tile, you have information as to what was missing in his hand. If he draws one tile and plays it, you know that if you can force the tableau to end in the values he was missing, you will force him to draw more tiles.

You can play to score, to block or to domino. In the scoring game, you attempt to get the largest score without regard to who dominoes. The scoring game is the obvious strategy and it is probably what you will pursue at the start of the game when you do not know the distribution of the tiles.

In the blocking game, you try to force a blocked game with the intent that you will get the lowest negative score. The blocking game is an end game strategy which depends on counting suits to see that there are no tiles outstanding in the suits on the arms of the tableau.

Playing to domino is really a version of the blocking strategy, since you will have the lowest negative score, namely zero. However, it also has the advantage of giving you the lead in the following hand. That lead can be important if you are close to winning the game.

Remember that being the one to domino is not always the same thing as getting the most points in a hand. Look for a suit where you are heavy or have control of the remaining tiles and try to get that suit exposed on one or more of the arms of the tableau to guarantee you have a play on your next turn.

Other All Fives web pages

James Yates' Dominoes Strategy page is devoted to the rules and strategy of All Fives dominoes.

Here is a link to the rules of Five-Up, compiled by Ken Tidwell, editor of the Game Cabinet. This corresponds to the game here called All Fives.

All Fives Software and Online Games

You can download a very good shareware computer version of this game for Windows from Curtis Cameron's Windows Dominoes Games page.

Game Colony offers head to head Five-Up games and multi-player tournaments, which can be played free or for cash prizes.

Mike Perry's Allgood Software publishes a Dominoes program for the Macintosh, which plays a wide variety of domino games, including Muggins and All Fives.

All Fives can be played against computer opponents at Online Domino Games.